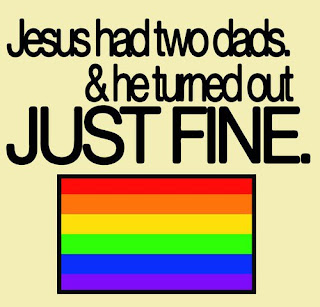 ALTHOUGH Good Friday is one of the holiest day in the Catholic calendar, it has not stopped gay rights campaigners from launching a controversial "Jesus had two dads" poster campaign.

The posters, which will be visible on public transport in Dublin from Monday, are designed to highlight the issue of inequality under civil partnership laws.

Gay rights group Noise has long been campaigning for the same marriage rights as same-sex couples.

According to Noise one of the most outrageous aspects of the new laws is the complete lack of any rights for gay parents and their children.

The group says that although gay families are a reality in today’s Ireland they are still being ignored.

Noise spokesman Max Krzyzanowski said the posters are a specific reminder to the public and the government that gay people still don’t have the same rights as straight people.

"Civil partnership does not provide equality for gay and lesbian couples and their families. This is simply unacceptable in a modern republic," he said.

"Our Constitution states that, for the purposes of Irish law, family life is based in marriage.

"But the language of the partnership scheme completely and deliberately ignores the existence of families headed by gay and lesbian couples," he said.

"It offers no way for parents to create protected legal bonds with each other or with their children, and offers children no right to a legal relationship with their two mums or two dads."

Noise maintains the Civil Partnership Bill also contains a two-tiered system of recognition for unmarried couples — "civil partnership" for same-sex couples only, and "domestic partnership" for both gay and straight couples.

The organisation will hold its third annual "March for Marriage" on August 14.