Vatican hopes Indian Bible will translate into surge of converts 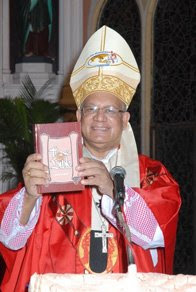 Barefoot and wearing a sari, with a bindi on her forehead and a naked baby on her shoulder, the woman in the picture is unmistakably Indian. So is the man behind her, clad in a loincloth and turban.

They could be any poor family in an Indian village, or at one of the country's teeming railway stations. This, however, is no ordinary family.

The image is one of the Virgin Mary with Joseph and the baby Jesus in the first “Indianised” version of the Bible, published by the Roman Catholic Church last month.

The New Community Bible is part of an attempt by the Vatican to attract more converts in the world's second-most populous country as congregations decline in Europe and North America.

“I am sure this Bible, made in India and for Indians, will bring the word of God closer to millions of our people, not only Christians,” Oswald Gracias, the Archbishop of Bombay, said at a ceremony on the Bible's release.

Produced by the Society of St Paul, the Bible is the first in this nation of 1.1 billion to be written in simplified English. It features 27 sketches of typical Indian scenes: one shows a family in a slum beneath skyscrapers. Mahatma Gandhi and Mother Teresa also feature in lengthy notes interpreting the text for Indian readers.

The notes even quote Hindu scriptures, such as the Ramayana and Mahabharata epics, to help to explain Christianity to prospective converts. “We wanted to show the parallels between the themes in the Bible and in Indian religions,” Father Tony Charanghat, a spokesman for the Archbishop, said. “We've put the sacred text in a local context.”

Christianity is reputed to have been brought to India by Thomas the Apostle, “Doubting Thomas”, in AD52, and the first Catholic missionaries came from Portugal in the 16th century. It is now the third-largest religion in India - after Hinduism and Islam - with 24 million followers. Of those, 17 million are Catholics, compared with two million in 1900.

The growth of India's Christian flock has slowed since anti-conversion laws were introduced in seven states under pressure from Hindu nationalists.

It is still far faster than in Europe and North America, where the congregation has grown by 2.3 per cent since 2000, compared with 21.4 per cent in Asia, according to the International Bulletin of Missionary Research.

“The calculation is that this is the last great missionary front on Earth,” John L. Allen Jr, a Vatican expert based in Rome, said.

The idea of an Indianised Bible was conceived in the 1980s after Bernardo Hurault, a French priest in Chile, produced a simple Spanish version with a commentary. His Christian Community Bible of 1971 has been translated into French, Filipino and Chinese and is used in South America, Africa and Asia.

Indian church leaders wanted more than a translation: they wanted cultural relevance. So they asked 20 experts on Christianity and Indian religions to devise a commentary that would help Indian converts.

For example, when Jesus tells disciples to turn the other cheek, the notes compare this to Gandhi's creed of non-violence.

Conservatives say that such devices corrupt the Bible's original meaning, while Hindu nationalists say that they amount to blatant proselytising.

A print run of 30,000 of the new Bibles sold out in a week in Bombay. In Delhi, St Paul's bookshop has only a few copies left.

“We've had to limit the number of copies to three per person,” Father Stephen Calunkudy, who works at the shop, said.