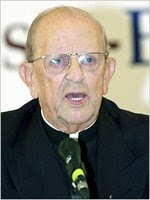 Fr. Marcial Maciel Degollado, the once powerful founder of the Legionaries of Christ and favorite of the late Pope John Paul II, was buried in Mexico recently in what was described as an “understated and solemn” ceremony, a disgraced figure who was plagued in his latter years by persistent charges that he had abused young seminarians in his earlier years.

Arguably the greatest fundraiser of the modern church, Maciel benefited from John Paul’s many endorsements in generating huge support for the Legion’s educational network, which required a $650 million annual budget, according to The Wall Street Journal.

The Legion has 21 prep schools in America, a fledgling University of Sacramento, Calif., and operates the nation’s only three seminaries for teenage boys. At the same time, prelates have banned the Legion from operating in Los Angeles; St. Paul and Minneapolis; Columbus, Ohio; Richmond, Va.; and Baton Rouge, La. Archbishop Harry Flynn of St. Paul and Minneapolis called the Legion “a parallel church.”

Notably, his passing was not marked by any public ceremony in Rome, his primary residence for years, nor did Pope Benedict XVI, who disciplined Maciel two years ago, issue any words of sympathy.

In May 2006 Benedict ordered Maciel to a “life of prayer and penitence” after an investigation of allegations that had been filed in 1998 in then-Cardinal Joseph Ratzinger’s office at the Congregation for the Doctrine of the Faith. The priest was spared a trial and harsher punishment.

Citing Vatican sources who were permitted to see the evidence against the Legion founder, John L. Allen Jr. reported in NCR that Maciel had “more than 20 but less than 100” accusers.

To Legionaries, Maciel died a victim of false accusations, a conspiracy that duped Pope Benedict. To bedrock followers, Nuestro Padre -- Our Father -- as they refer to Maciel, was a saint.

He nominated his mother for canonization (to date, without success). In 1992, he told a Legionary priest at a canonization ceremony in Rome: “Wait 30 years before you begin my process” for sainthood.

Between these poles -- a falsely accused saint or a predator dripping hubris -- he lived a double life, shaped by wealth and propaganda.

Born in 1920 into a prominent family with four uncles as bishops, Maciel was expelled from two seminaries for reasons that have never been explained. He became a priest only when one of his uncles ordained him after private studies.

By the 1950s, Maciel had a seminary in Rome. But in 1956 Pope Pius XII removed him as the Legion’s director when Maciel was hospitalized for morphine addiction.

Seminarians who had taken vows never to speak ill of Maciel defended him in a Vatican investigation into his secret life.

From age 12 to 24, Vaca, in what he termed a twisted psychosexual relationship with Maciel, “loved the figure of the founder, the priest ... not the predator.”

Another accuser, José Barba, now a college professor in Mexico City, said: “We all lied. I said simply that he was a saint ... as I had been taught.”

Maciel went on to build seminaries, prep schools and several universities in Mexico, Spain, Chile, Italy and the United States. Students were taught that Nuestro Padre was a living saint, chosen by God to lead a rejuvenation of the church.

In 1996, Hartford Courant reporter Gerald Renner wrote a story on the Legion’s purchase of the National Catholic Register newspaper. After Renner’s article, several ex-seminarians called him, complaining of dictatorial tactics that drove them out of the Legion.

By then, Arturo Jurado, Mexican by birth, a teacher at the U.S. Defense Language Institute in Monterey, Calif., had contacted this writer.

Claiming that Maciel had repeatedly abused him as a seminarian in Rome, Jurado put me in touch with seven other men who gave sworn statements echoing his. Juan Vaca included a detailed letter about Maciel he had sent Pope John Paul II in 1989. In 1996, I joined Renner for an assignment for the Courant to look into the accusations against Maciel.

Eight men provided in-depth accounts of Maciel and we had well-corroborated information from a ninth accuser, who had died. These dignified professionals included a Spanish priest, Félix Alarcón, serving in Florida.

The Vatican was silent in response to interview requests. In fall 1998, Jurado and Barba traveled to Rome and filed a canon law case. For several years, it seemed the case was doomed to gather dust.

In November 2004, about the same time an ailing John Paul led a ceremony celebrating Maciel’s career, Ratzinger asked Msgr. Charles Scicluna, promoter of justice for the Doctrine Congregation, to reopen the case against Maciel.

The Legion never admitted Maciel’s guilt. Like Christ before Pilate, runs the order’s story line, Maciel refused to defend himself. After the 2006 punishment, he accepted his “new cross” with “tranquility of conscience.”

Until 2006, the Legion promoted his outright innocence on its Web site with testimonials by Fr. Richard John Neuhaus, writer George Weigel, former drug czar William Bennett, former Harvard Law professor and now U.S. Ambassador to the Vatican Mary Ann Glendon, Catholic League president William Donahue, among others, alongside the order’s rebuttal of the victims and denunciations of Renner and me.

After the 2006 decision, those materials disappeared from the Web site.