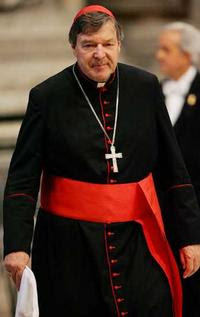 Cardinal George Pell of Sydney, Australia, has repeated his insistence that Catholic politicians who support embryonic stem-cell research should "think twice before next receiving Communion."

Cardinal Pell has been severely criticized by some Australian politicians and editorial writers for saying that Catholics should not support a bill that would allow for "therapeutic cloning."

Archbishop Barry Hickey of Perth has found himself the focus of a government investigation for making similar comments, which one lawmaker saw as threatening.

In his Sunday Telegraph newspaper column, Cardinal Pell made it clear that he will not back down from the dispute.

He wrote: "All Catholics who continue to reject important Catholic teachings, even in areas such as sexuality, family, marriage, abortion, euthanasia, cloning where 'liberals' claim the primacy of conscience rules, should expect to be confronted, gently and consistently, rather than comforted and encouraged in their wrongdoing."