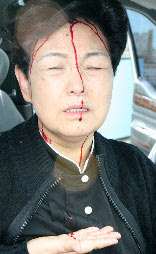 A Korean bishop has warned Catholics in his diocese not to join activities at a controversial Marian shrine founded by a woman who claims to have experienced the Eucharist changing into a lump of bloody flesh in her mouth on several occasions.

The Church in 2005 rejected the alleged miracles associated with the shrine, which began more than two decades ago in Naju, 285 km south of the capital.

Despite earlier warnings, Bishop Choi said in his pastoral directive, "some 700 followers of Julia Kim Youn Hong-sun of Naju joined a liturgical event in Bucheon celebrated by a Korean priest from Atlanta diocese, in the United States.

"Fr Andrew Pak Hui-jung, canon law professor at Incheon Catholic University, told UCA News that even if Youn and her followers firmly believe in their cause, it is not good to go against Church guidance."

Nobody knows what the Blessed Mother's will is. Church recognition of her revelations cannot be done in a short time. The devotees need to wait and see what happens next, while obeying the bishops' directives," he said.

The Korean Church needs to be more active in banning the activities of Youn and her followers, he continued.

"Priests from Indonesia and the Philippines have come to Naju and celebrated Masses with the followers."Youn insists she has received private revelations through her Marian statue in Naju since it "started weeping" in 1985.

Many Catholics including several local and foreign bishops have visited the statue since then.The woman insists her statue has shed tears of blood and fragrant oil, and given her revelations.

Another claim is that the Eucharist fell "from heaven" at times when visiting bishops and her group had Mass in her private chapel.

Youn and her group further claim the Eucharist changed into a lump of bloody flesh in her mouth several times, including once in 1995 when Pope John Paul II gave her Communion at the Vatican.

The Naju website maintains the late pope saw this but said nothing.

In 1998, however, Archbishop Victorinus Youn Kong-hi declared there was "no evidence that proves" the alleged visions and strange phenomena concerning Youn and the Marian statue are "truly supernatural and thus from God."

At the time, the now retired prelate headed Kwangju archdiocese, which covers Naju.