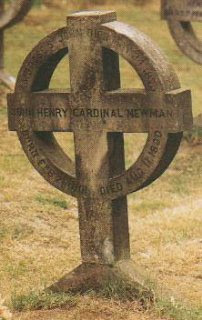 A vivid first hand description of the Funeral of Cardinal Newman published in a Birmingham newspaper the day afterwards may help to explain why no bones where found when his grave was excavated with the utmost care on Thursday October 2 2008, Feast of the Guardian Angels.

A long report in the 'Birmingham Daily Post' on Wednesday August 20 1890, ended: "When the rites had been achieved, the crowd without the gates was suffered to enter by batches and see the grave; and then the coffin was covered with mould of a softer texture than the marly stratum in which the grave is cut.

"This was done in studious and affectionate fulfilment of a desire of Dr Newman's which some may deem fanciful, but which sprang from his reverence for the letter of the Divine Word; which, as he conceived, enjoins us to facilitate rather than impede the operation of the law 'Dust thou art, and unto dust shalt thou return'."

The Venerable John Henry Cardinal Newman died on Monday August 11 1890 and was buried in the small secluded cemetery at the Oratory House, Rednal, near Birmingham on Tuesday August 19 1890. He was declared Venerable by Pope John Paul II on January 22 1991.

A statement released on behalf of the Fathers of the Birmingham Oratory on Saturday, October 4 2008 stated: "During the excavation the brass inscription plate which had been on the wooden coffin in which Cardinal Newman had rested was recovered from his grave.

"Brass, wooden and cloth artefacts were found. However there were no remains of the body of John Henry Newman. An expectation that Cardinal Newman had been buried in a lead lined coffin proved to be unfounded.

"In the view of the medical and health professionals in attendance, burial in a wooden coffin in a very damp site makes this kind of total decomposition of the body unsurprising."

The report in the 'Birmingham Daily Post' of August 20 1890 has been included in Volume XXXII of the 'Letters and Diaries of John Henry Newman', as an appendix. The volume, masterfully edited by Dr Frank McGrath, an Australian Marist Brother, is due to be published by Oxford University Press shortly.

Volume XXXII is the last in the series, probably the greatest collection of letters in the English language, begun by Fr Stephen Dessain, the great Newman scholar, and member of Cardinal Newman's Birmingham Oratory, during the late 1950s. Volume XI, the first in the series, the start of Newman's Catholic years, was published during 1961.

The long report in the 'Birmingham Daily Post' began with a vivid description of the scene in the Oratory Church, Edgbaston: "With a pomp which personally he would have eschewed, but which, as a faithful son of the Church of his adoption, he would cheerfully have acceded to as due to her dignity, and position, the obsequies of Cardinal Newman were brought to a close yesterday (Tuesday August 19 1890).

"In the morning, at the Oratory Church, the Requiem Mass was sung in full state, no fewer than seventeen bishops being present in full pontificals, while the chancel and tribune were filled with clergy and Roman Catholic dignitaries, who, to the number of three or four hundred, had come, from all parts of the diocese to join in the Solemn Mass for the repose of the soul of this distinguished ecclesiastic and much loved man.

"In the nave was a scarcely less distinguished assembly of laymen. The premier Duke of England, and many dignified pupils of the famous Oratory School, with the Lord Chief Justice, Anglican canons and clergy and Oxford dons - representing the friends and associations of Newman's youth - made up a congregation such as is seldom gathered in an English place of worship."
+++++++++++++++++++++++++++++++++++++++++++++++++++
Disclaimer