Will the Pope’s expected visit contribute to healing process? 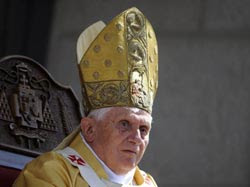 TÁ sé ag teacht! Il Papa. Benedict XVI himself – all the signs point to a visit in two years’ time. Reading between the lines of statements from the Vatican and Archbishop Diarmuid Martin, the man once known as the ‘Rottweiler’ on account of his ability to stifle dissent will be descending on these shores.

It will be interesting to see how the island of saints, scholars and paedophiles greets him. The expected date of arrival is June 2012, location Dublin. The occasion? The 50th International Eucharistic Congress. By that time, the argument goes, the sight of bishops falling on their croziers like demented Roman generals will have faded from the public mind.

No doubt, it’s also hoped that by 2012 revelations concerning the bestial clerical abuse of children will no longer shock. That, however, is a long shot (the Cloyne report has yet to be released).

Still and all, the Vatican seems sure that the Eucharistic Congress in Dublin will be the bees’ knees. Their blurb says it “will engage people from Ireland and around the world in a programme of liturgical and cultural events”.

Whether the Pope’s expected visit to the Congress will contribute to a healing process in the wake of the sex abuse horrors is open to question. So far his attitude has been akin to raising the drawbridge: no sharing of the sense of betrayal at the terrible crime done to generations of children, no moral leadership and no recognition that the Irish Catholic Church may be careering into disintegration because of the vile sex scandals.

For example, he has not yet explained why the practice of clerics abusing children was allowed to continue for decades. Nor has he apologised for the actions of his priests and bishops.

For many Irish people, that’s not good enough. To add salt to the wound, in September, Pope Benedict will be trotting off to Britain for a three-day State visit during which he’ll see the Queen and Gordon Brown. However, he does not intend to meet Irish abuse victims, although appeals have been made to add on an Irish leg to the tour.

He’s keen, however, to go to the Six Counties. He wants to make up for the failure of his predecessor, John Paul II, who couldn’t get to the Black North because of Unionist threats. Nevertheless, he doesn’t want a northern visit tagged on to this year’s UK trip. Vatican spokesmen said that a Six County visit ‘should rather constitute a pastoral visit on its own, perhaps in 2012.’

Intriguingly, the politicos are already preparing for that visit. Even more astonishing, the Queen of England is part of the plan. British, Irish and Vatican diplomats are known to be concocting a two-pronged diplomatic gesture involving the Pontiff and Her Royal Self.

The plan is for both of the Queen and the Pope to come to Ireland – in 2010 for the Queen and 2012 for the Pope. They’ll both be carrying the message that a formal closure to the Northern conflict has been achieved and that Catholics and Protestants can now live happily ever after.

Last month, President Mary McAleese, who on occasions seems worn out from inviting the British Queen to this country, suggested that this year would be a good time for a visit. (Dissident republicans, opposed to British troops occupying a significant part of this country, have warned they will do everything in their power to disrupt Mrs. Windsor’s Grand Tour).

Before that, the Archbishop of Dublin, Diarmuid Martin, told a New York audience that it was the Pope’s intention to visit the North. Archbishop Martin said that a papal visit to Belfast, combined with a visit by the British Queen to Dublin, would mark a symbolic opening of a new era, north and south.

So, the scenario seems to be working out as follows. Queen Liz invades Dublin and meets the natives. Much patting on the head for the Establishment participants in the Peace Process (the queue will be huge). Then, onto the North for more of same.

The Eucharistic Congress follows in 2012, probably with a guest appearance from the Pope. Then he heads north. More accolades for the now endless lines of Establishment ‘peace-makers.’

The purpose of it all? Ostensibly, to cure the wounds inflicted by the Northern war. The real reason? Political: to reinforce the importance of the Catholic Church’s position in the three jurisdictions, London, Belfast and Dublin.

However, as to an utterance of an apology to the Irish people for the evil the Church visited on our children, or a symbolic Act of Contrition, forget it. If Rome’s response up to now is anything to go by, there’ll be no mea culpa.

Indeed, it is somewhat bizarre that while the Vatican intends to promote touchy-feelingness between Protestants and Catholics in the north, southerners are in for an earful of traditional Rome triumphalism.

It is as if the clerical sex crimes never happened and that a public outburst of good old-fashioned piety, courtesy of the Eucharistic Congress (in itself an esoteric event), will lead to a resurgence of Catholic Ireland’s blind allegiance to Rome.

POPE OUT OF TOUCH?

All of which raises these questions: is the Pope living in the real world? Has he any concept of the sense of outrage that Irish people feel?

Is he aware of the empty churches and of the insults hurled at his bishops, and that some are effectively prisoners in their own palaces, afraid to poke their noses outside the door? Does the Church’s galloping irrelevance in Ireland bother him?

Does he see any need for personal accountability or for the need to offer encouragement to a dispirited clergy that is composed of good men and women trying to come to terms with the fact that their superiors protected the monsters who carried out the horrible deeds?

If the Pope believes a Eucharistic Congress is the solution to the Church’s problems, he’s wrong. The Ireland of today is not the Ireland of 1932, when the last Congress took place.

That was the time priests stalked the dance halls, rooting out ‘immorality.’ Censorship was pervasive, bishops had the final say on the wording of the laws of the land, and clerical paedophiles roamed freely.

The final Mass in the Phoenix Park was attended by a quarter of the population of the Irish Free State, half a million crowded O’Connell Bridge for a blessing from the Papal Legate, and De Valera threw himself on his knees, protesting his eternal loyalty to the See of Rome. It was Ireland’s greatest public spectacle of the 20th century.

Excellent posting BUT did I miss something or have you forgotten that Ratzinger as head of the CDF had virtually unlimited power of all Roman Catholic clerics, in Ireland and everywhere else, during the time the abuse was happening - along with a fair bit of knowledge of much of the details - and apparently did nothing. He's as guilty as any bishop who moved abusers from place to place, and much more guilty than some of those (former Dublin auxiliary) bishops who did not do so, but still resigned. The only place he should visit in Ireland is the retired bishops' home.