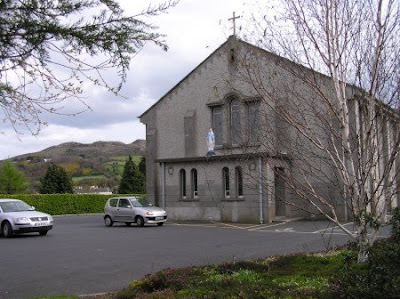 The story behind the story
What has been happening to date in the long running saga between a local Parish Priest in an Unfair Dismissal case and the Parish Secretary.

Details had until this week been kept from the local Parishioners who have a right to know what is going on in their Church in Bray, County Wicklow.

INFORMATION FOR PARISHIONERS OF OUR LADY QUEEN OF PEACE

DETERMINATION
“Recognising the unusual circumstances of the case the Tribunal find that the procedure, used by the respondent to dismiss the Claimant was not in accordance with the Industrial Relations Acts.

The Claimant tendered her resignation in May 2005 but the employer instead of dealing with it at that time believed that he was entitled to retain it and act upon it at a later date of his choosing. This he purported to do in September 2005.

In January 2006 he stopped paying the Claimant.

This in the opinion of the Tribunal was an unfair procedure”.

As the dismissal was procedurally unfair—”The Tribunal award the Claimant the sum of €1560 (being the equivalent of four weeks’ pay), as the minimum award allowed under the Unfair
Dismissals Acts, 1997 to 2001.

Sealed with the Seal of the Employment Appeals Tribunal this 24th day of October 2007. P.J. O’Leary (CHAIRMAN).

In spite of the Tribunal’s decision the Respondent Fr. Larry White PP has appealed the above decision to the Circuit Court for a hearing and it is now on a waiting list.

In spite of the Tribunal’s decision the Respondent Fr. Larry White PP has appealed the above decision to the Circuit Court for a 4 day hearing and it is now on a waiting list.

Regarding complaint to The Rights Commissioner by Claimant Ms. Margaret O’Hehir “The claimant seeks redress for the alleged breaches of the Terms of Employment Information Act”.

I have carefully considered the evidence as presented by the parties. There is no doubt that there was an original written agreement between the parties and that there were discussions in amending the documentation to take care of the enhanced rate of pay and also the number of hours that would be available for work under the contract.

However the Terms of Employment (Information) Act 1994 states in section 3, subsection (4) that such statement furnished by an employer to an employee under section 3 (subsection (1)0 should be signed and dated by the employer and a copy (subsection 3(5)) retained during the period of the employees employment and period of 1 year thereafter.

It is evidenced that there is no signed copy qualifying the existing period of employment nor is there a written letter indicating that the contract under discussion for amendment was being enacted by the respondent giving the usual 1 month notice.

I therefore find that the claimant presented a valid complaint and award her the sum of €300 in full and final settlement of breaches under the Terms of Employment (Information) Act, 1994.

It should be noted that legal fees for Fr. White are being paid for by you the Parishioner or the Parish unlike Ms. O’Hehir who has to foot her own legal bills.

i.e. Fr. White announced before all collections at Masses this weekend that his fees were paid by Parish Insurance BUT the premiums for the Parish insurance are paid out of the contributions of the Parishioners for the running of the Parish!!!

In both cases to date an award was made in favour of the Claimant although the second award is disputed by Fr. White and as stated an appeal has been lodged against it.

It should be noted that a third case is awaiting a date for hearing before THE EQUALITY TRIBUNAL in Dublin in regard to serious complaints made to the Employer while the
Claimant was still in employment and which were not dealt with satisfactorily.

Further notice will issue from our group with the results of this hearing in due course.

Sincere thanks to the many hundreds of Parishioners who signed the Petition for Margaret’s Reinstatement.

A Mass has already been offered for their intentions.

Thanks to all for your ongoing support for Margaret over the past two and a half years in her quest for justice.

For those who are not aware of it—as a Church going Parishioner in Queen of Peace since 1989 Margaret was also removed from both the Parish Council and Liturgy Groups because of the employment dispute which should not have affected her rights or standing as a Parishioner.

She was also refused permission to be a Special Minister of the Eucharist.

Parishioners hear the Parish is ALL INCLUSIVE but that is not the case—you can be treated as ‘a leper’ overnight.

This Newsletter is sponsored and distributed by a group of concerned church going Catholic Parishioners and supporters and is being distributed by them to highlight the continuing injustice towards our friend Margaret who was a highly dedicated Parish Secretary serving our Parish for over 4 years and was treated in high regard by all who know her we take grave exception as to the way our Parish has been demoralised and the truth has been suppressed.

He died for ALL of us—not for the CHOSEN FEW.

Why then does Queen of Peace exclude those they feel are not ‘in favour’?

Update is the Parish Priest has 'suddenly' gone off for 5 months 'break from his Parish' for what he says is on Doctor's advice.

Parishioners think it is more likely this is the start of his 'phasing out' even though he has 3 more of his 9 years to serve at the Parish.

The Secretary has gone through 3 years of 'hell' trying to clear her good name and rubbish the 'bought and paid for' medical reports against her - clearance of which can be seen in the copies of her medical reports within the article.

Very strange too it seems that possibly 'The Church' had this site story closed down permanently as things were 'heating up' too much for the PP.

The newsletter given to all the homes in the Parish by Secretary and her supporters outlining the truth and Indymedia finally made Archbishop's House sit up and take notice after sitting on their hands for almost 3 years.

when i read statements such as ''your grace dirmuid martin ,parish priest father larry white etc , it makes my blood boil as i certainly would never address those pigs using those 'titles' . tell it like it is and slaughter the lot of them with the greatest weapon at your disposal ....WORDS.and choose your words carefully and with care , dont allow those pigs the benefit of respect as you are doing ,

Ms Piggy is counting the titles of the above mentioned members of the church ,and we can feel the pain as you write their titles , yes ,the pain is in peoples behind listening to the likes of you and your rants and raves over some piece of .d.n.a.would you not get the local tramp lizzie canadian McManus to do the bit of girlie stuff on your behalf , at least she would not have charged you 26 k ,and rising , to see old bonehead silver daddy in court on a regular basis , old ms no name has spent well above 26k ,and rising to see her xxxxxx hubby on 43 occasions in courts from Dublin ,Bray , Wicklow and Kildare , and was beaten fairly and squarely in 96% of the 43
rat runs to the above mentioned courts , and then the finale and the revelations came flooding out in order to shut that ratbag up once and for all.
O what a lovely war , mind the typing errors when you have to post under one of dozens of ''names '' on indymedia as you are on the blacklist of indy and cant use your real name ANYMORE , Or you will be deleted in the middle of the night even though the oul drink has been taken ,. God How you must miss me , i hear you are starting a club out in bray dedicated to my name , ah shucks , dont make me blush ,have they fed you the smirnoff yet , she was always ''partial '' to the vodka and the oul lads ,wait till she starts passing you out in the vevay letting on she is answering the mobile fone , its all ahead of you ,ENJOY

I assume the 43 hearings in Courts all over refer to a Maria Bradshaw now since divorce Maria Keating? One ex wife of person posting item Michael Bradshaw?

Secretary has only attended 2 hearings if poster is giving impression that she is the one who attended 43. She attended Wicklow Rights Commissioners hearing that she won against the Parish for having no contract and Unfair Dismissal Hearing in Dublin which is under appeal.

A false impression should not be given that above posting has ANYTHING to do with ex Parish Secretary.

She is a Pioneer for 45 years never taken a drink in her life and never intends to. Will soon get gold pin DV.

This lady was brought up by family to show respect to others (even if they did not earn or deserve it) thus referring to members of the Clergy etc.,by their correct titles regardless of personal disputes.

Secretary has never met or spoken to Maria Keating/Bradshaw nor does she wish to do so. She also has never met Maria's ex husband except that he said in email that he passed her by in 60's while she attended Loreto Convent in Bray but she was not aware of his existence.

This is to clarify false assumptions. Having been informed by poster via email that silver daddy refers to an abuser of children - this would be an incorrect statement to make about any Priest attached at present to Our Lady Queen of Peace and it is not a title I wish to be associated with.

End of story. Hope this clarifies the above posting.

you as per usual dont know what you are skettering about ,do u ?