Pope’s views on Ukraine war worry some in Canada 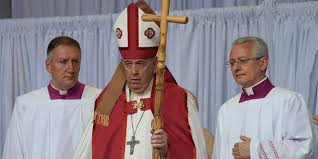 Pope Francis is touring Canada this week on a “pilgrimage of penitence” to account for the wrongs done to Indigenous children at the hands of the Catholic Church.

But if Yaroslav Broda had his way, Francis would make amends for another church failing — its refusal to strongly condemn Russia for invading Ukraine.

Broda, a leader of the Ukrainian community in Edmonton, said he found the pope’s comments about the war so far “disheartening.”

Canada has the third-largest Ukrainian population of any country, trailing only Russia and Ukraine. Thousands of Ukrainians fled their home country in the early 20th century, settling on the Canadian prairies when the federal government offered free land to newcomers.

Edmonton is now home to about 12 percent of an estimated 1.36 million people of Ukrainian descent who live in Canada, according to the most recently available federal data. That’s more than any other metropolitan area.

Pope Francis’ visit to Canada is his first to a country with a significant Ukrainian population since the war began in February. The Ukrainian Canadian Congress (UCC), however, did not request an audience with the pope.

“We think this visit has one focus. Yes, what’s happening in Ukraine is front of mind for us, but reconciliation is also very important,” said Broda, the UCC’s Edmonton chapter president, adding that the group is “trying to build relationships with Indigenous groups and work on our part of reconciliation.”

The pope’s visit to Canada has been dubbed an “apology tour” by some. He traveled to a community south of Edmonton on Monday to deliver a historic apology to Indigenous survivors of residential schools run by the Catholic Church for more than a century from the 1880s until the 1990s. The schools were meant to wipe out Indigenous languages, traditions and customs — a system derided as “cultural genocide” by a high-profile Truth and Reconciliation Commission report in 2015.

If the circumstances surrounding the papal visit were different, Broda said his organization “definitely would” request an audience with Francis.

The pope has repeatedly offered words of compassion to Ukrainians victimized by Russia’s invasion. In a June interview with Jesuit magazine La Civiltà Cattolica, he decried the “brutality and ferocity” of Russian troops, and celebrated the “heroism of the Ukrainian people.”

But the pontiff also turned heads with a suggestion that the invasion was “perhaps somehow either provoked or not prevented” — a possible nod to Russian claims that NATO’s aggressive posture in the region forced President Vladimir Putin’s hand.

“The Pope hasn’t spoken that much about (the war), but what he has said is disheartening,” said Broda, one of thousands of Greek-Ukrainian Catholics in Canada.

There have been other papal missteps along the way.

Broda said the spirit of that event was a “nice sentiment on the surface,” but it implied that the Russian people weren’t themselves fanning the flames of war.

“As easy as it is to say it’s all Vladimir Putin’s fault, Putin didn’t rape women and children in Bucha and Mariupol,” he said. “A lot of those atrocities that came to light after the Russians withdrew were not committed by Vladimir Putin. They were committed by your average Russian soldier.”

Broda recalled a massive pro-war rally at a Moscow stadium in March that attracted 200,000 people and various shows of support for Putin’s invasion in European nations with a large Russian diaspora.

“Those are people who live in the West and have access to all the information in the world, and they still choose to support the war,” he said.

In the same interview with La Civiltà Cattolica, Francis attempted to add nuance to his views.

“Someone may say to me at this point: but you are pro-Putin! No, I am not,” he said. “It would be simplistic and wrong to say such a thing. I am simply against reducing complexity to the distinction between good guys and bad guys, without reasoning about roots and interests, which are very complex.”

The pope told Reuters in June that he hoped to visit both Moscow and Kyiv in an effort to bring a resolution to the war. He said only that those trips would follow his time in Canada.

“The first thing is to go to Russia to try to help in some way, but I would like to go to both capitals,” he said.

Given the chance to speak directly to the pope, Broda said the UCC would ask him to pick a side.

“I would hope that His Holiness would hear the concerns of Canadian Catholics and take a more clear and unequivocal position in support of Ukraine,” he said. “I don’t think the lines between good and bad have been quite so clear in a really long time.”