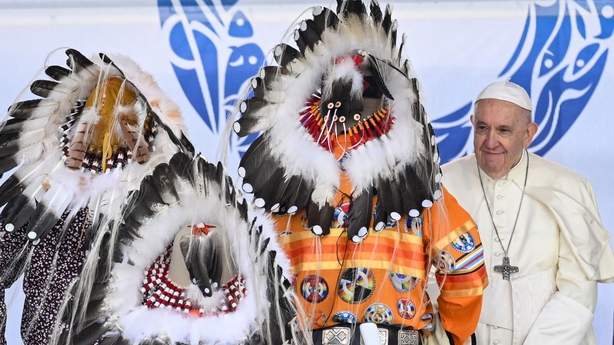 Pope Francis has made a historic personal apology today to indigenous survivors of child abuse committed over decades at Catholic-run institutions in Canada. Speaking near the site of a former school, he said that he "humbly begs forgiveness for the evil" that many Christians committed against indigenous peoples, while calling for a "serious investigation" of the so-called residential schools and more assistance to help survivors and descendants heal.

"I am sorry. I ask forgiveness, in particular, for the ways in which many members of the Church and of religious communities cooperated, not least through their indifference, in projects of cultural destruction and forced assimilation," the pope said before a crowd of First Nations, Metis and Inuit people in Maskwacis, Alberta.

"The place where we are gathered renews within me the deep sense of pain and remorse that I have felt in these past months," the 85-year-old pontiff said.

It comes at the start of a week-long visit he has described as a "penitential journey."

The leader of the world's 1.3 billion Catholics arrived yesterday in Edmonton, in western Alberta province, to visit one of the largest former residential schools where the abuse of First Nations, Metis and Inuit children took place.

The 85-year-old pontiff's trip is primarily aimed at apologising to survivors for the Church's role in the scandal that a national truth and reconciliation commission has called "cultural genocide."

From the late 1800s to the 1990s, Canada's government sent about 150,000 children from indigenous communities into 139 residential schools run by the Church, where they were cut off from their families, language and culture.

Many were physically and sexually abused by headmasters and teachers, and thousands are believed to have died of disease, malnutrition or neglect.

In Maskwacis, an indigenous community south of Edmonton where the Ermineskin residential school was located until its closure in 1975, several hundred people dressed in traditional clothing gathered this morning, two hours ahead of the pope's arrival.

"I'm happy, it's a miracle. I am humbled," 50-year-old Gilda Soosay - one of the residents who was set to meet the pope in person - told AFP, adding: "I wish my mom was here."

"I'm going to ask him to pray for me, my family, my people healing," she added.

A delegation of indigenous peoples travelled to the Vatican in April and met the pope - a precursor to Francis' trip - after which he formally apologised.

But doing so again on Canadian soil will be of huge significance to survivors and their families, for whom the land of their ancestors is of particular importance.

Later today, the pope will travel to the Sacred Heart Catholic Church of the First Peoples in Edmonton, one of the city's oldest churches, where he will deliver a second speech to indigenous communities.

Since May 2021, more than 1,300 unmarked graves have been discovered at the sites of the former schools, sending shockwaves throughout Canada - which has slowly begun to acknowledge this long, dark chapter in its history.

"I hope that this visit is the beginning of a change in history, a change in the way business is going to be done, and a way for us to begin our healing journey," George Arcand Jr, the grand chief of the Confederacy of Treaty Six First Nations, said on national television.

"I asked the pope to walk with us and create this new road that needs to be created."

The flight to Edmonton was the longest since 2019 for Francis, who has been suffering from knee pain that has forced him to use a cane or wheelchair in recent outings.

The papal visit, though highly anticipated, is also a source of controversy for some survivors and their families.

Many expect Francis to make symbolic gestures, such as returning some of the indigenous artifacts that have been held in the Vatican for decades.

The Edmonton resident is a member of the Muskeg Lake Cree Nation, the largest indigenous group in Canada.

"I think we have to forgive, too, at some point," she told AFP. But "a lot of stuff was taken away from us."

Francis is the second pope to visit Canada, after John Paul II, who did so twice in the 1980s and again in 2002.