‘From politics to piety’: Tributes to councillor who quits to follow his dream of becoming a priest 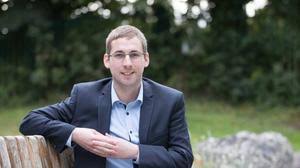 Hope was expressed today that departing member of Clare County Council, Mark Nestor (FF), will return to Clare as a priest and officiate at the weddings of councillors’ children.

At the September meeting of Clare County Council, Cllr Ann Norton said she would be “delighted and honoured” if that happened as she praised the 30-year old Ennis man’s “difficult decision” to leave the Council to commence studies for the priesthood.

Councillors from all parties paid tribute to the youngest member of the Council and gave him a standing ovation in the Council chamber after Cllr Nestor confirmed he has formally notified the executive of his decision to resign his seat from Tuesday morning “to begin my formation to the priesthood on Wednesday”.

Cllr Nestor travels to Spain this week to commence his priestly studies and Cllr Mary Howard (FG) said that he was following his dreams and his heart in pursuing his ambition to become a priest.

Cllr Howard confessed that she started crying earlier this year when Cllr Nestor first informed her of his decision.

Cllr Howard said: “My first reaction was to start crying because I was delighted for him but sad for us.”

She said: “Today is a sad day for us but a happy day for Mark. You are following your heart and your dreams. Mark is a man of great integrity and really loves his town and his family.

“Please God in seven years time, you might officiate as a priest at our mass here in the foyer for Clare County Council staff….Be very proud that you have made a very, very difficult decision and you have done it.”

Clare Mayor, Cllr Tony O’Brien (FF) told Cllr Nestor: “What you are doing is a very brave and courageous move. You are a person and a man to be admired and respected.”

Clare Council chief executive, Pat Dowling said: “It is a long journey. It is a big step from councillor to priesthood and from politics to piety at such a young age.”

Cllr Nestor told his colleagues “I am very hopeful that the experience I have gained in my political life will stand to me as I journey along my new pathway in life. It always has been and will continue to be my intention to serve the people of County Clare to the best of my ability and I intend to do so going forward simply in a different capacity.”

In an interview on Clare FM’s ‘Morning Focus’ last week explaining his decision, Cllr Nestor remarked: “We often talk about God’s calling. It was no longer that God was at the door knocking. It was as if he was outside with a megaphone calling.”

Cllr Nestor became Clare County Council’s youngest councillor when he was elected to the Council in the 2019 local elections in his first time to contest a seat.

Earlier this year, the position of the Mayor of Ennis was on offer to Cllr Nestor earlier this year but Cllr Nestor passed up the chance to be mayor for the current year as he was focused on commencing his studies to be a priest.

At Monday’s meeting, Ennis mayor, Cllr Clare Colleran Molloy (FF) said: “You are a conscientious, serious, contemplative young man…It is the right way for you to go and you are 100 per cent certain of it.”