USA : Feelings of Betrayal After Catholic Church Is Leased to Coptic Parish 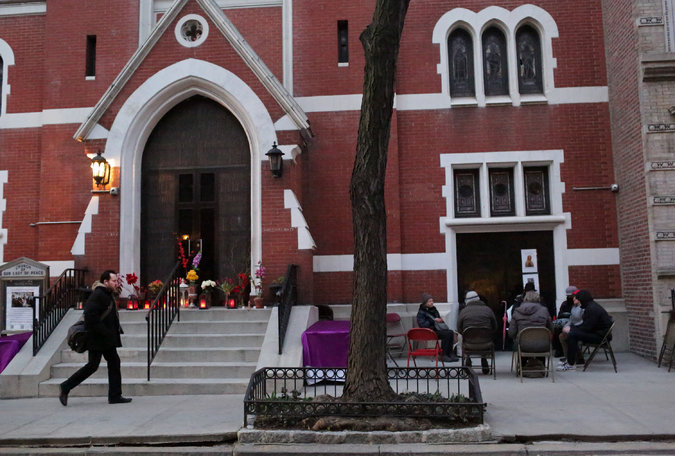 For nearly 600 consecutive evenings, a group of worshipers has prayed the rosary outside the locked doors of Our Lady of Peace, a Roman Catholic Church on the Upper East Side of Manhattan, trying to keep their church alive.

Since their church was shut down in a round of parish mergers in 2015, the group has been fighting to reopen it through prayer vigils and a continued legal appeal before the Vatican.

But the archbishop of New York, Cardinal Timothy M. Dolan, has been pursuing a different plan, taking the matter of this East 62nd Street chapel to the pope himself.

On Sunday, the jewel-box-like sanctuary of Our Lady of Peace was opened for a Divine Liturgy service, a weekly sacrament of communion, but not a Roman Catholic one.

At Cardinal Dolan’s direction, the archdiocese has granted a one-year lease to the local parish of the Coptic Orthodox Church, an ancient Christian denomination based in Egypt.

The lease is the first stage of a plan to transform the church into the Coptic Church’s New York cathedral, an idea that both Cardinal Dolan and Coptic leaders say Pope Francis has blessed.

Last April in Rome, Cardinal Dolan introduced Pope Francis to Bishop David, the leader of the Coptic Orthodox Diocese of New York and New England. They raised the idea of selling the Manhattan church to the Coptic faith, which has a history of persecution in the Middle East, the archdiocese said.

The Pope of the Coptic Church, Tawadros II, subsequently emailed Pope Francis to speed the sale and received a note in reply blessing it, Bishop David said in an interview.

The letter, from the archdiocese, was read aloud during Masses on Feb. 11 and Feb. 12.

“Pope Francis was delighted to learn that your parish, together with the archdiocese, was interested in assisting the Coptic Orthodox Church in this way,” the letter to parishioners said.

But the former parishioners of Our Lady of Peace were shocked to learn that their church, founded by Italian immigrants, was on the agenda of popes while their legal appeal was still active.

“We are like the first wife in a broken marriage who has been rejected for someone else and left out in the cold,” said Janice Dooner Lynch, whose family has belonged to the parish since 1921. “That’s how the archdiocese has treated us.”

She added, “My family’s whole spiritual history is with that church.”

Tami Ellen McLaughlin, 51, who led eight other parishioners in the 30-minute rosary on the sidewalk on Friday, said: “Why the rush? Why during Lent? Why now?

“Does Pope Francis really know what’s going on?” Ms. McLaughlin continued. “We have our doubts.”

There was overwhelming joy on Sunday at the Coptic Church service, where silver cymbals played a beat during communion and the smiling bishop sprinkled holy water at the back pews.

But Father Gregory Saroufeem, 38, the priest of St. Mary & St. Mark Coptic Orthodox Church, said last week that the sadness of the holdout parishioners also made the move “bittersweet.”

The St. Mary & St. Mark parish was founded by first-generation Egyptian-Americans in 1999; English is its main liturgical language. It has been holding services in apartments and rented spaces since its founding and attracts about 200 worshipers each week — mainly young professionals, students and young families.

“We completely understand and get what they are going through because we were also without a home,” Father Gregory said. “But in terms of what is happening on the side of the Catholic Church, that is definitely an internal issue that they have to resolve together.”

Mickey Riad, who is on the board of the Manhattan Coptic parish, said the archdiocese had shown the parishioners four buildings. They selected Our Lady of Peace even though they were told that a legal dispute was underway and that “it could take a few years for it to happen,” he said.

Bishop David, who led the three-hour Divine Liturgy service on Sunday in glittering gold and red velvet robes, told the congregation that a Coptic cross was on the top of the church’s exterior facade, which he took as a sign that their arrival was meant to be.

“The pope already gave the consent; that is the most important thing,” he said after the service. “Because he feels that the Egyptian community is a suffering community, a persecuted community, and he wants to help us.”

Still, canon law experts said it was highly unusual for the New York archdiocese to lease the church when an appeal was pending before the Apostolic Signatura, the Vatican’s highest court.

“Most bishops would let the status quo remain during the appeal,” said Nicholas P. Cafardi, dean emeritus and canon law professor of the Duquesne University School of Law in Pittsburgh. “That’s the normal practice.”

He added that the pope’s blessing did not mean the matter was decided because popes as a rule do not overrule their own court.

“You can’t describe things to the pope in social situations and derive a juridical result from that,” Mr. Cafardi said. “It’s not fair to the pope, to the church’s legal system or the parties involved.”

The former parishioners of Our Lady of Peace have argued that the archdiocese had no reason to close their church because it was financially healthy and had a vibrant congregation of about 400 parishioners.

The parishioners said they planned to continue to pray their nightly rosary outside of the church. Bishop David said that once the Coptic Church took possession of the title of the church, they would be permitted to worship each night inside and could hold one Catholic Mass per week, but he said that could not happen before the sale.

“We hope that they will feel welcome here and that their prayers have been answered,” said Mr. Riad, the church board member.

Jessica Bede, 65, who helps organize the rosary services, said that “it would be wonderful if they said, ‘Oh, the church is open. Why don’t you come inside and don’t freeze?’” But she warned that she would not give up the fight for the church until the last avenue of appeal was exhausted.