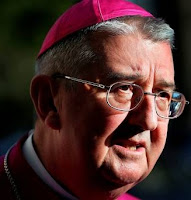 Two of the country’s most senior catholic bishops have expressed serious criticisms of the healthcare system with one warning that the “system itself is sick and in need of healing”.

At a conference at the weekend to mark World Day of the Sick in Sutton in Dublin, Archbishop Diarmuid Martin warned that the “crisis” in the healthcare system was “one of the darkest shadows” hanging over a wealthy Ireland.

He said on a daily basis people were hearing about systems which are not responding to needs, as well as the failures of a two tier system whose negative effects disproportionately strike the poor, the isolated and the elderly.

In a reference to the bureaucratic failures of the HSE, the Archbishop said the healthcare system seemed to be “trapped within tentacles of its own making” with attempts to address one problem revealing another problem and rendering a definitive solution ever more distant.

Paying tribute to “highly professional” and “extraordinarily dedicated” doctors, nurses and carers as well as those providing palliative care, Dr Martin said they were “most acutely aware of the failings and inadequacies and false spending of systems”.

He said Irish society had a responsibility to ensure that these healthcare professionals did not lose motivation or leave Ireland through “sheer frustration or our lack of interest or recognition of the contribution they bring”.

Referring to the Church’s changed and changing role in healthcare, he said it was not “abandoning the sphere” but of focusing on the ways in which individual Christians, communities and institutions can seek out the most vulnerable.

At a Mass for the anointing of the sick in St Gabriel’s parish in Dollymount on Sunday, Archbishop Martin appealed to people to have the courage to work to change the way society cares for the sick.

He also called on them to create a culture of respect for life and to defend the integrity and dignity of every person at every stage of their life.

Separately, in Sligo cathedral, Bishop Kevin Doran said at a Mass for World Day of the Sick that most people say that, once a person gets into the health system, the care is very good, but that getting in is a major problem.

When the sick have to wait too long for treatment and when those who care for the sick themselves become sick from stress, “it is perfectly reasonable to feel angry”.

Dr Doran also acknowledged that many who work in hospitals and nursing homes operate under “enormous pressure and with facilities that don’t always measure up to what is required.”

“Like many of you here, I am very conscious that, in spite of all the very good people who work in our healthcare system, the system itself is sick and in need of healing,” the Bishop of Elphin said.