Diocese takes next step for sainthood for Sheen 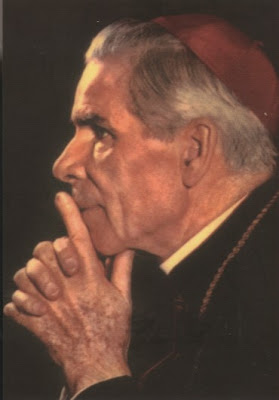 A milestone in the cause for sainthood of El Paso native Archbishop Fulton Sheen comes Sunday, with a special mass of thanksgiving at 10:30 a.m. at the Cathedral of Saint Mary of the Immaculate Conception, Peoria.

It is part the “postrema session,” which ends the Peoria Diocese’s role in Sheen’s path to sainthood. During the mass, documents collected over the past few years will be officially packed, sealed and notarized.

Sheen was a diocesan priest who later became famous worldwide as a radio and television personality, author and orator. He died in 1979.

The documentation for sainthood includes about 100 testimonies of 15- to 30 pages each; reviews of each of Sheen’s nearly 70 books from the diocese’s Theological Commission; and about 1,500 pages of historical/archival materials, said Monsignor Richard Soseman, the diocese’s judicial vicar.

There is some open seating for the public, but any reserved seats that remain unoccupied by 10:15 a.m. will be opened to the public. Bishop Daniel R. Jenky will lead the mass, which will be broadcast internationally through the Eternal Word Television Network (EWTN) starting at 9:30 a.m. Sunday. The broadcast will include interviews with Sheen experts.

The ceremony is the culmination of thousands of hours of gathering documents, books and personal testimonies. Dr. Andrea Ambrosi, a specially trained theologian, will carry them to the Vatican, said Soseman.

The items will be examined by the Vatican Congregation for the Causes of the Saints, which will review the documents as well as those describing a reported miraculous healing of a Champaign woman, said the diocese in a statement.

If the congregation concurs a miracle occurred, the group will recommend the Pope declare Sheen as “blessed.” More review and the possible response of the Holy Father could take another two to five years or more.

Another process follows beatification, including evidence of another miracle, before Sheen could be canonized as a saint, the diocese statement said.

Part of the early materials came from the El-Paso based Archbishop Fulton John Sheen Foundation, a museum inside the Freight House Exchange. The foundation donated a set of his books along with personal testimonies, said Karen Fulte, a key volunteer. Sheen was born in El Paso on May 8, 1895.

The foundation received hundreds of letters attesting to Sheen’s virtues, along with communications crediting him with miraculous intervention in people’s lives.