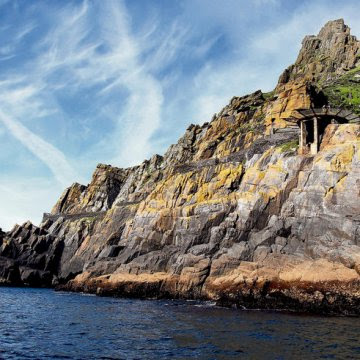 SKELLIG MICHAEL’S settlement history may be “far more complex” than previously thought, according to a Connemara archaeologist who has discovered several additional stairways on the Kerry rock.

The previously unidentified sets of steps were discovered recently by archaeologist Michael Gibbons on the northern and southern flanks of Skellig Michael, a Unesco world heritage site.

Gibbons believes the networks of stairways indicate several phases to Skellig Michael’s occupation, believed to date from the sixth to eighth centuries when monks settled there – with the last permanent residents being lightkeepers from the 1820s until the lighthouse automation there in April 1987.

Remains of a fort above the existing monastery indicate the monks could have moved into a “pre-existing citadel”, Gibbons says. This structure may have been one of a number of “high forts” that are known to have existed on the Dingle peninsula and on the Blasket islands.

The set of more than two dozen steps found by Gibbons on the southeast approach, or “Monk’s landing”, is to the east of a smaller set identified some years ago by Valentia Island historian Des Lavelle.

The newly discovered northern stairway is below “Christ’s saddle”, the small valley 130m above sea level between the rock’s two distinctive peaks.

Both flights can be seen from sea, but are beyond the general visitor’s route and are only accessible with mountaineering equipment. He has also found an earlier variant of the eastern steps.

From there, one flight leads up to the monastery, comprising walled enclosures with dry-stone cells and oratories looking out from a ledge on to Little Skellig and the Kerry coastline.

There is also a set of steps up the precipitous 218m south peak to a hermitage, which has been controversially restored by the Office of Public Works and Department of the Environment.

Visitors to the rock are not permitted up this stairway, which has been fenced off by the OPW.

Last year Gibbons discovered a previously hidden staircase above the lighthouse, along with a rock-hewn cross and several additional clocháns or huts.

While dozens of crosses of various sizes have been found on Skellig Michael, only a handful have been carved directly from a rock foundation.

The cross, close to a clochán, may have marked a prayer station on the route to the monastery – or may predate the monastery, says Gibbons.

The independent archaeologist, who has been critical of the OPW’s style of conservation or restoration, has appealed to the State body to take a sensitive approach to new discoveries.

Three years ago Unesco criticised the State for the absence of a management plan, and found that conservation work on the south peak had “dramatically” transformed the appearance of monastic remains.

The report found that such work was “justifiable” and the “outstanding universal values” of the monument remained intact once such conservation work was documented in an academic publication.

The OPW was unable to confirm yesterday if such documentation has been published.

Gibbons also believes the network of staircases deserves considerably more research. “Staircases are the key to Skellig Michael’s historical chronology, since the sixth century or further back, and up until the period when the Commissioners of Irish Lights would also have created access routes,” he explains.

Viking raids, a shifting climate and more numerous storms, and a change in the management of the Irish church from a monastic to a diocesan structure were factors that contributed to the eventual abandonment of Skellig Michael’s monastery, some 11.6km west of Kerry’s Bolus Head.

SIC: IT
EDITED BY CW Team