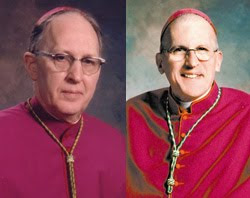 After days of speculation, the Holy See has announced that Pope Benedict has accepted the resignation of controversial Scranton Bishop Joseph Martino, 63, and his 77 year old auxiliary, Bishop John Dougherty.

The Vatican statement it noted that the pope had accepted the resignation under a provision of church law in which a bishop due to illness or "some other grave reason, has become unsuited" to carry out his duties.

Bishop Martino had the misfortune of taking over a diocese that had grown rapidly for more than a century but had started to decline in recent decades, The Times-Leader notes.

Annual financial reports got gloomier each year, as Martino cited operating deficits and budget shortfalls, insisting they left him with little choice but to curtail many diocesan programs, close schools and consolidate churches.