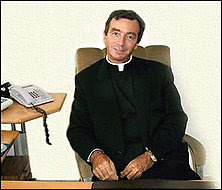 THE Catholic Church has suspended an Italian monsignor (Tommaso Stenico - pic'd here) after identifying him as a priest who anonymously admitted being gay during a TV documentary.

The decision clearly illustrates the Vatican's stance that homosexuality is a sin.

Pope Benedict XVI has spoken out repeatedly about the issue, and even before becoming Pontiff he was known as someone who campaigned against homosexuality within the church.

The monsignor has not been identified by officials at the Vatican, but they have confirmed that he is currently suspended from his job.

The Rev Federico Lombardi, a spokesman for the Holy See - the church's government - said: "The case is being handled with utmost reserve.

"Higher-ups are evaluating the situation with the necessary reserve and with the obligatory respect for the person involved, even if this person has erred."

He continued that the Vatican had "to intervene decisively and with the severity required by conduct not compatible with priestly service and with the mission to the Holy See."

The priest at the centre of the row was a top official in the Vatican's Congregation for Clergy, which is an office set up to ensure proper conduct by priests.

He had given an interview to a private Italian TV network earlier this month for a programme that included talks with several priests about their homosexuality.

Both his face and voice were disguised by the show's producers, but watching Vatican officials recognised the room where the interview took place as the monsignor's office.

During questioning, the priest said that he "did not feel it was wrong" to have sex with gay men.

Within months of Pope Benedict becoming Pontiff in May 2005, the issue of homosexuality within the Catholic Church and how to tackle it had become one of the main issues for the Vatican.

He issued guidelines that attempted to ensure that gays could not begin training for the priesthood, even sending inspectors to tour seminaries in the United States.

The Pope is fiercely against same-sex relationships, having spent the 25 years before he came to head the church as its enforcer of orthodoxy.

During this time he created a number of official statements concerning the Vatican's stance on the issue.

Writing in 1986 for the National Catholic Reporter newspaper, the then Cardinal Joseph Ratzinger said: "Although the particular inclination of the homosexual person is not a sin, it is a more or less strong tendency ordered to an intrinsic moral evil, and thus the inclination itself must be seen as an objective disorder.

"Above all, we must have great respect for these people who also suffer and who want to find their own way of correct living.

"On the other hand, to create a legal form of a kind of homosexual marriage, in reality, does not help these people."