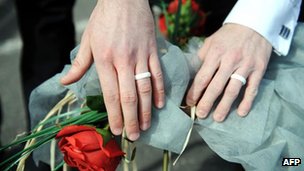 Ministers are pursuing the "wrong policy" on gay marriage, and should be focusing on family breakdown, a High Court judge has said.

But Liberal Democrat minister Lynne Featherstone has dismissed what she sees as the "shameful" arguments being used by some religious figures.

The comments come after the Roman Catholic Church's leader in England and Wales denounced the plans.

Archbishop of Westminster Vincent Nichols told the BBC the government had no mandate to push through same-sex marriage laws in England and Wales.

And in his Christmas Eve sermon he said that marriage between men and women shares in "the creative love of God".

Sir Paul told the Times newspaper: "So much energy and time has been put into this debate for 0.1% of the population, when we have a crisis of family breakdown. While it is gratifying that marriage in any context is centre stage... but it [gay marriage] is a minority issue. We need... a more focused position by the government on the importance of marriage."

He added the breakdown of marriages and its impact on society affects 99.9% of the population, which is where more investment and time should spent.

During his BBC interview, Archbishop Nichols said of the gay marriage plans: "There was no announcement in any party manifesto, no Green Paper, no statement in the Queen's Speech. And yet here we are on the verge of primary legislation. From a democratic point-of-view, it's a shambles. George Orwell would be proud of that manoeuvre, I think the process is shambolic."

He claims during a "period of listening", those who responded were "7-1 against same-sex marriage".

Lib Dem minister Ms Featherstone writes on her blog that it is "quite shameful to argue against equal marriage on the grounds that religions will be forced to conduct such marriages".

This "not only became untrue once the government's intention to make it permissive for those religions that wish to conduct such services to have the freedom to so do - but on which issue the government is bending over backwards (some would say too far) to ensure any such fears are unwarranted", she says.

Ms Featherstone, who used to be the equalities minister and now has an international development brief, adds that "it is even more shameful" that some argue there is "no mandate" for the change.

Meanwhile, Labour's Shadow Minister for Women and Equalities, Yvette Cooper MP, said the decision by two people to get married "should be a cause for celebration - whatever their gender or sexuality".

"Marriage as long-term, loving commitment is deeply important to a strong society. But strengthening marriage means making sure it reflects the modern and inclusive values of that society too," she said.

In the past, the head of the Roman Catholic Church in England and Wales has likened committed gay relationships to "profound friendships".

Pope Benedict XVI reiterated his opposition to gay marriage last week in a pre-Christmas address, saying it was destroying the very "essence of the human creature".

"People dispute the idea that they have a nature, given to them by their bodily identity, that serves as a defining element of the human being. They deny their nature and decide that it is not something previously given to them, but that they make it for themselves."

The UK government has previously announced that the Church of England and Church in Wales will be banned in law from offering same-sex marriages, with other religious organisations able to "opt in" to holding ceremonies.

The government plans to allow gay marriage but says it will not force religious bodies to perform services.
EDITED BY CW Team