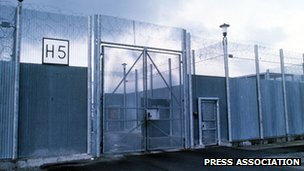 A visit by Britain's leading English Catholic nobleman, the Duke of Norfolk, to the Maze Prison in July 1981, during the republican hunger strike, provoked a strong rebuke from its two Catholic chaplains.

The rebuke is revealed in files from the Public Record Office NI that have been released under the 30-year rule.

He was accompanied by Northern Ireland Office minister Lord Elton.

In a subsequent report to the NI Secretary of State, Humphrey Atkins, Lord Elton reported that they had visited the prison hospital where a number of hunger strikers were approaching death.

The duke had talked to IRA hunger striker Paddy Quinn, then on the 38th day of his fast, and to the relatives of another hunger striker Kieran Doherty.

Lord Elton wrote that the duke had told him afterwards "that he had identified himself as unimpeachably Roman Catholic and that this had been accepted in each case".

"It also seemed to be accepted by all concerned that the hunger strike had been condemned as sinful and he (the duke) pointed out that it could achieve nothing," he said. "It became clear, however, that there was a fixed dedication to achieving the death of the hunger strikers in question.

"Doherty's mother, in particular, made it clear that if her son came off the strike it would be a personal defeat for him. In spite of obvious emotional distress, she was committed to supporting him to the end. His girlfriend, however, seemed much less enthusiastic."
In their journey back from the Maze Prison, Lord Elton was at pains to dissuade the duke, a member of the House of Lords, from pursuing his idea of an Anglo-Irish 'condominium' over Northern Ireland.

No sooner had the duke left the prison than he received a sharp rebuke from the two Catholic prison chaplains, the Rev John J Murphy and the Rev (later Monsignor) Tom Toner.

They said that as chaplains responsible for the pastoral care of the prisoners they resented "the implications for us of a moral judgment which you passed and which you described as the teaching of the Church".

"Your attitude and views caused unnecessary hardship for a family already bewildered and distressed by the imminent death of their son," they said.

The priests acknowledged that the duke's concern for the prisoners was "praiseworthy".

However, they added that in "the extremely delicate situation of the Maze whose inmates have attracted pastoral attention from the Pope … we should be obliged if you would leave the moral guidance of prisoners and their families to those whose responsibility they are".

They also accused the duke of discourtesy in failing to consult them as the official Catholic chaplains at the prison.

On receipt of the priests' protest, the duke informed Lord Elton from his seat at Arundel Castle that the letter had "caused my hackles to rise".

In his letter to the two priests, dated 28 July, 1981, the duke told them he had spent a "most harrowing day's visit" to the prison where he had spoken to some of those "on the blanket" as well as Kieran Doherty's mother and girlfriend.

"I mentioned to both that I was very sad they were on hunger strike for 'special status' because I knew, from being a backbench peer, that the government were determined not to grant this," he said. "I added that, although the Irish hierarchy has spoken against suicide as morally wrong, I was pleased to hear they were getting Holy Communion daily."

The duke told Fathers Murphy and Toner that he was "distressed" that they felt he had "caused unnecessary hardship for the Doherty family".

Finally, he revealed that he had just attended Mass in honour of his ancestor, Saint Philip Howard and had asked the priest to pray for the hunger strikers.

'In short, my sincerity to try and help you is total," he added.
EDITED BY CW Team