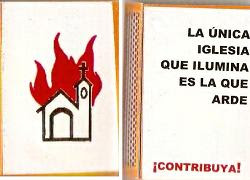 During protests by both supporters and opponents of the abortion ship operated by the Dutch group “Women on Waves,” which docked last week in Valencia, Spain, feminist organizations openly called for church burnings and handed out matches to their followers.

The presence of the “ship of death” in Valencia last week led to one of the largest pro-life protests in the city’s history, with large numbers of people voicing opposition each day to the ship’s services, which include bringing women into international waters to undergo abortions according to Holland’s liberal abortion laws.

On October 18, a group of 40 feminists gathered to counter the pro-life protests, which brought out four times as many people. They passed out boxes of matches with the picture of a burning church and the caption, “The only church that brings light is the one that burns. Join us!”

Very Disturbing... I bet if that dingy of theirs catches fire they'll blame the Christians; just like Nero...