Exhibition uncovers female side of God 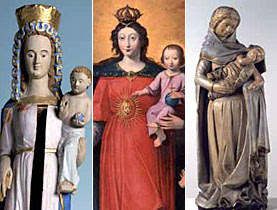 The first book of the Bible tells us God created humankind "male and female" in his own image. Yet Christianity has consistently projected an all-male image of God.

A new exhibition showing in Fribourg aims to set the record straight, by lifting the veil on the feminine face of God.

More than 300 exhibits span a period of 10,000 years. The female objects of worship include the Egyptian goddess Isis and the Virgin Mary.

Othmar Keel, who co-organised the exhibition, says changes in society have brought pressure for a new look at the portrayal of the Old Testament God.

"For a long time it was only men who decided about the image of God, and how God has to be presented," the professor of Old Testament studies told swissinfo. "The only male God is somehow the last resort of patriarchy."

The exhibition shows how the female images and themes of the polytheistic cultures are later reflected in the great monotheistic religions of Judaism and Christianity. It does so by juxtaposing and contrasting ancient artefacts and pictures from more modern times.

The first section looks at the subject of hair, a current theme given the debate over the role of the veil in Islam. A series of ancient terracottas from the Middle East depict goddesses with exaggerated female characteristics and abundant hair – a sign of vitality and sexuality. Facing them the habit-clad figure of a nun speaks volumes about Christianity's tendency since St Paul to see a woman's crowning glory as a source of temptation.

The root of the idea could go back as far as Eve: a plaque from the 5th to 6th centuries shows the first woman with wild, flowing hair – an image of debauchery.

The image of the breast is one also taken up in depictions of the Virgin Mary. Facing Asherah is a picture dealing with the curious legend of the Virgin and St Bernard, where the mother of Jesus is seen expressing milk from a breast to wet the lips of the saint who has asked her to become her son.

The Virgin Mary is a central figure in the exhibition, venerated as the mother of Jesus, but for Catholics placed just lower than God.

"We realised that all the kinds of roles these goddesses took – as mother, virgin, fighter, as dominating plants and animals, you find again in the picture of the Virgin Mary," commented Keel.

But the image of the Virgin changes down the centuries: from the mother of Jesus, she becomes the centre of attention herself, holding her son away from her body.

"If you look at these pictures, she is distributing grace by her own authority," said Keel. "Of course, every Catholic knows she is not a goddess, but if you look at her pictures she acts like a goddess."

The Fribourg University professor explains that like ancient goddesses the Virgin responds to a basic human need, at the same time as fulfilling an ideal.

The ideals attributed to the Virgin were in earlier times associated with the cult of Isis, widespread in the Mediterranean region from the 1st to 3rd centuries AD.

Isis represents the ideal woman fulfilling the typical roles of caring for husband and children. After her husband is murdered her attentions bring him back to life, and she is able to conceive and bear his child, before he leaves to become the king of the underworld. Isis is left to bring up her child, becoming the perfect mother.

One section is given over to depicting the relationship between woman and the natural world. According to Keel, many goddesses were represented as trees. And in the Bible, it is written that God himself did not create the plants and animals but instructed Mother Earth to do so.

Christianity later made a connection between the Virgin and trees and plants.

"In Switzerland there are at least a dozen places where it's said the Virgin Mary appeared in a tree," said Keel. "The tree has something of protecting, shadowing, taking care and feeding."

Keel points out that the ancient association of sexuality and holiness was not taken up by Christianity. But two thousand years later, sexuality is once again a form of idolatry in our modern society.