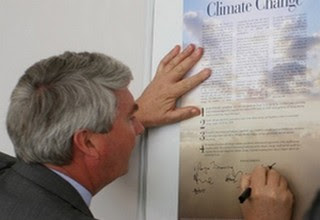 Following Cardinal George Pell's reassertion this week of his skepticism towards climate change, The Climate Institute has renewed its call to Christian churches to sign an interfaith Call to Action directed towards the Federal Government.

On Wednesday, Cardinal Pell accused "radical environmentalists" of "moralising their own agenda and imposing it on people through fear".

Earlier this month, Jesuit Fr Frank Brennan (pictured) and Columban Fr Charles Rue represented the Catholic Church at the launch of the Interfaith Common Call to Action on 3 October.

The institute has been facilitated by the Climate Institute and builds on Common Belief which was released late last year and included statements by a wide range of Australian faith leaders about climate change and a shared belief that there is a moral obligation to care for the earth.