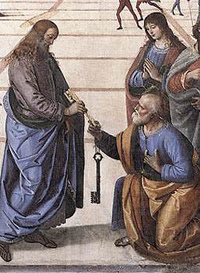 Orthodox and Roman Catholics recognize that the bishop of Rome has primacy among all the world's bishops, although they disagree on the extent to which his leadership translates into a concrete exercise of authority.

"The question of the role of the bishop of Rome in the communion of all the churches" must be studied in greater depth, said members of the official Roman Catholic-Orthodox theological dialogue.

The dialogue commission met in early October in Ravenna, Italy, and completed work on the document, "Ecclesiological and Canonical Consequences of the Sacramental Nature of the Church: Ecclesial Communion, Conciliarity and Authority."

While the Catholic and Orthodox participants agreed to publish the document Nov. 15 after it had been submitted to leaders of each of the churches, the Web site of the Russian Orthodox representative to European institutions published the document Oct. 21.

Russian Orthodox Bishop Hilarion of Vienna and Austria, head of the European representative's office, had gone to Ravenna for the dialogue meeting, but walked out before the working sessions began.

Seeking agreement that would lead to full unity between Catholics and Orthodox, the dialogue commission's document tried to explain how communion and authority are expressed and exercised on a local, regional and universal level within the one church of Christ.

In the document, commission members introduced the topic of the authority of the bishop of Rome, the pope, which they said they would continue to examine in the next phase of their dialogue.

"Both sides agree" there was an order of precedence among the ancient bishops' seats of Rome, Constantinople, Alexandria, Antioch and Jerusalem, and that the order "was recognized by all in the era of the undivided church," it said.

"Further, they agree that Rome, as the church that 'presides in love,' according to the phrase of St. Ignatius of Antioch, occupied the first place in the 'taxis' (order) and that the bishop of Rome was, therefore, the 'protos' (first) among the patriarchs," it said.

"They disagree, however, on the interpretation of the historical evidence from this era regarding the prerogatives of the bishop of Rome as 'protos,' a matter that was already understood in different ways in the first millennium," when the East and West were still united, the document said.

The document said that just as there is an order within the Trinity -- Father, Son and Holy Spirit -- there is "an order among local churches which, however, does not imply inequality in their ecclesial nature."

The local church is with and under its bishop, who is ordained as a successor to the apostles and given the grace to teach, preach and lead the local faithful to holiness, it said.

The local churches, in turn, are in communion with one another, it said. While a regional synod or bishops' conference may not interfere in an individual bishop's diocese, the bishops are called to work together to support one another and address common problems, it said.

And, the document said, Catholics and Orthodox believe the local church must be in communion "with the totality of local churches" of the past, present and future."

"A local church cannot modify the creed, formulated by the ecumenical councils," it said, nor can it "change a fundamental point regarding the form of ministry by a unilateral decision."

In the past when serious problems plagued the Christian community and threatened to destroy its unity, the bishops would gather in an ecumenical council.