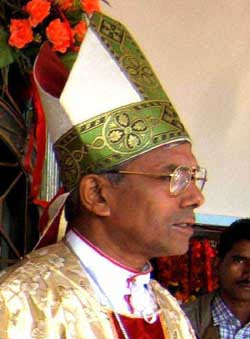 They belong to the Franciscan Clarist Congregation in Indore in the North Indian state of Madhya Pradesh.

According to a news release from Salem Voice Ministries News Service (SVM), the nuns were beaten up Oct. 25 while returning from a prayer meeting.

SVM reported that a group of 20 activists belonging to Bajrangdal (the Monkey Brigade group), and workers from Dharma Raksha Samiti (a society for protecting the Hindu religion), beat the nuns with sticks.

The Hindu activists accused the nuns of persuading people that they needed to convert to Christianity. SVM reported that Sister Geo of FCC said, “The sisters were dragged and their clothes were torn.”

One nun’s leg was broken and another had to get seven stitches on her head. They were admitted to hospital. The other nuns were also injured.

The Global Council of Indian Christians (GCIC) reported that while the nuns filed a report with the police the complaint was not initially accepted.

GCIC reported that one of the nuns denied any attempt to convert anyone to Christianity.

However, SVM reported that a local official said the sisters had attempted to convert people in the area.

He added, “The people who came to meet (the) sisters after the prayer meeting picked ... a quarrel on this issue, which lead to (the) clash between the sisters and our workers.”

Responding to these allegations SVM reported that GCIC President Dr. Sajan George said, “It is nothing but finding an easy way to justify the brutality done to women, and we will fight ... tooth and nail.”

SVM reported that officials at an emergency meeting of the diocesan education committee strongly objected to the response from the state and district administration.

Education Secretary Sr. Christie said, as reported by SVM, “As a mark of protest we will close all our educational institutions in Indore, and nearby places where these Christian associations operate. If the government do not arrest them, then we will take longer protests in the due course of time.”

Archbishop Dr. Leo Cornelio, Chairman of the Catholic Bishops Council of Madhya Pradesh and Chattisgarh state, reacted very sharply to the attack on the sisters. He said in a news release, “We have been suffering silently, but it looks that the fundamental organizations take it as a weakness from our part. It is an attack on women and human freedom.”

An emergency meeting of the Christian leaders were called in Bhopal, the state capital, to determine a course of action. SVM reported that the Christian community decided to join a peace rally to be held in Indore on Oct. 28 at Gandhi Chauk.

The GCIC further emphasized its condemnation of the attack, saying that the attempt to silence the nuns, the voice of the voiceless and the poor, is a hidden agenda to intimidate the small Christian community in India.