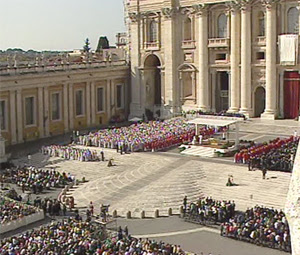 The biggest mass beatification ever has taken place in Rome, amid accusations that it is a political dig at the Spanish government.

The 498 Spanish martyrs, mainly priests, monks and nuns, were killed at the start of the Spanish civil war by left-wing government militias after the clergy, generally, sided with General Franco.

The ceremony comes at the start of a week when the Spanish parliament is expected to pass legislation condemning the rule of Franco.

The Spanish Catholic church has attacked the proposed law and insists today's ceremony was not politically motivated.

It says it has been gathering evidence for years of the killings of hundreds, if not thousands of its members during the civil war.

Some say Franco launched his rebellion in part because of the government treatment of the church.

"It's not a question of rewriting the Civil War," said one Spanish pilgrim attending the ceremony in St Peter's Square.

"It was religious persecution. They are martyrs because they died for their religion."