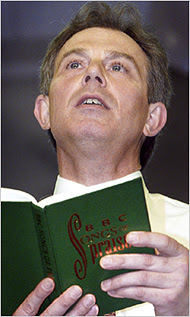 Sorry but i am dubious about Tony coming into the Church. In my view many of his policies were anti-faith and in many cases immoral.

even taking holy communion, irregularly and sacrilegiously in Catholic eyes

This is an unfair generalization. I believe it would be more accurately described as "certain Catholic eyes" as I for one, with many Catholic friends, have frequently heard Tony Blair being criticized but never for receiving Holy Communion.