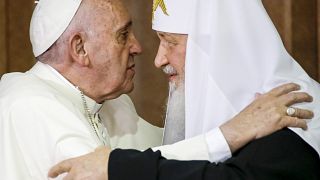 Pope Francis could meet Patriarch Kirill, the leader of the Russian Orthodox Church who the EU accuses of supporting the war in Ukraine.

The pair could come face-to-face at a meeting of religious leaders in Kazakhstan in September.

The pope will be in the capital Nur-Sultan from 13-15 September to attend the VII Congress of Leaders of World and Traditional Religions, the Vatican said.

He had planned to meet Kirill on 14 June in Jerusalem but cancelled that meeting on the advice of Vatican diplomats.

If the September meeting takes place, it would be only their second after they met in Cuba in 2016. The latter was the first such meeting between a pope and a leader of the Russian Orthodox Church since the Great Schism in 1054

The Vatican statement announcing the trip did not mention Kirill. It was released in Russian, Italian and English. Kazakh and Russian are the country's two official languages.

Since Russia’s invasion of Ukraine on 24 February, a rift has developed between the Vatican and the Russian Orthodox Church.

In an interview published in May in an Italian newspaper, Francis said Kirill "cannot become Putin's altar boy", which the Russian Orthodox Church criticised.

Kirill's position has also splintered the worldwide Orthodox Church and unleashed an internal rebellion which has led to the severing of ties by some local Orthodox Churches with that of Russia.

Russian President Vladimir Putin is a member of the Russian Orthodox Church and has presented his actions in Ukraine as a “special military operation” intended to "denazify the country".

Pope Francis has rejected such terminology, describing the invasion as an “armed conquest”, accusing Russia of “imperialism”, and calling the conflict a “cruel and senseless war”. He has expressed his wishes to visit both Kyiv and Moscow, hoping to promote peace in the latter.

The late Pope John Paul II visited the Kazakh capital in 2001 when it was known as Astana.