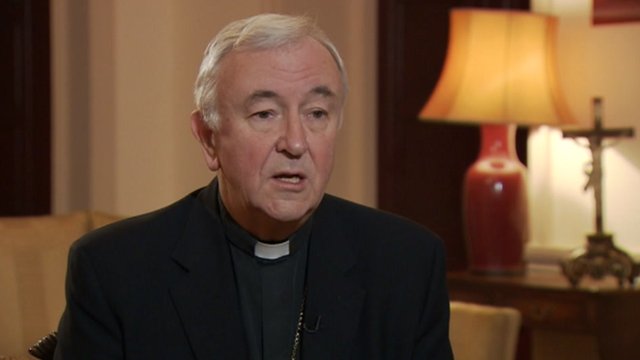 The Roman Catholic Church's leader in England and Wales says government plans for gay marriage are a "shambles".

Archbishop of Westminster Vincent Nichols told the BBC the government had no mandate to push through same-sex marriage laws in England and Wales.

And in his Christmas Eve sermon he said that marriage between men and women shares in "the creative love of God".

The government plans to allow gay marriage but says it will not force religious bodies to perform services.

Meanwhile, the outgoing Archbishop of Canterbury, in his final Christmas sermon in the role, admitted that the Church of England's credibility had been damaged by the recent vote against women bishops.

Dr Rowan Williams is to retire from the post at the end of the month.

Speaking in his sermon at Westminster Cathedral, Archbishop Nichols said "the love of husband and wife, which is creative of new human life, is a marvellously personal sharing in the creative love of God who brings into being the eternal soul that comes to every human being with the gift of human life".


This was Archbishop Nichols's strongest attack yet on the government's plans for gay marriage.

There was anger in his passionate criticism of the government's plans, and a call to Catholics to become involved in the political struggle against them.

He said MPs would have a free vote on the issue, and they should feel the weight of the Church's opinion.

I've never heard him speak with such emotion. This is something very close to the Church's heart and his personally.

Many Christians - including Roman Catholics - do support marriage for same-sex couples, and the government has made it clear that no churches will have to perform gay marriages.

However, the Church feels very strongly, not about whether it has an exemption about carrying out same-sex weddings, but about the distinction between the ceremony - the wedding - and the institution of marriage.

The Church says the government's plans will weaken society, "hollow out" marriage and diminish it for everyone else who's been married.

He added: "Sometimes sexual expression can be without the public bond of the faithfulness of marriage and its ordering to new life. Even governments mistakenly promote such patterns of sexual intimacy as objectively to be approved and even encouraged among the young."

During his interview, Archbishop Nichols said of the gay marriage plans: "There was no announcement in any party manifesto, no Green Paper, no statement in the Queen's Speech. And yet here we are on the verge of primary legislation. From a democratic point-of-view, it's a shambles. George Orwell would be proud of that manoeuvre, I think the process is shambolic."

He claims during a "period of listening", those who responded were "7-1 against same-sex marriage".

"There was anger in his passionate criticism of the government's plans, and a call to Catholics to become involved in the political struggle against them," our correspondent said.

In the past, the head of the Roman Catholic Church in England and Wales has likened committed gay relationships to "profound friendships".

Pope Benedict XVI reiterated his opposition to gay marriage last week in a pre-Christmas address, saying it was destroying the very "essence of the human creature".

"People dispute the idea that they have a nature, given to them by their bodily identity, that serves as a defining element of the human being. They deny their nature and decide that it is not something previously given to them, but that they make it for themselves."

The UK government has previously announced that the Church of England and Church in Wales will be banned in law from offering same-sex marriages, with other religious organisations able to "opt in" to holding ceremonies.

Announcing the plans, Culture Secretary Maria Miller said: "European law already puts religious freedoms beyond doubt, and we will go even further by bringing in an additional 'quadruple legal lock'.

"But it is also a key aspect of religious freedom that those bodies who want to opt in should be able to do so."

Although the Church of England has opposed gay marriage and is expected to oppose the government's bill, it has also said it was not consulted on a plan for the bill to include a specific ban on it conducting gay marriages. And the Archbishop of Wales, Dr Barry Morgan, said he thought the ban was a "step too far".

But Muslim leaders have called for the same legal exemptions as the Church of England in gay marriage legislation, with the Muslim Council of Britain saying it was "appalled" by the government's "utterly discriminatory" proposals.

The Scottish government has also published its proposed legislation to introduce gay marriage and a draft bill is now being compiled to be put to the Scottish Parliament.
Under the plans, religious and belief bodies would need to "opt in" to perform same-sex marriages.

Scottish ministers have insisted that, as in England and Wales, no part of the religious community would be forced to hold same-sex weddings in churches but both the Church of Scotland and Roman Catholic Church are opposed to the gay marriage proposals.

Earlier this year Cardinal Keith O'Brien, leader of the Catholic Church in Scotland, urged the Scottish government to hold a referendum on proposals to legalise same-sex marriage.

And in a newspaper article, he wrote that the proposal for same-sex marriage represented a "grotesque subversion of a universally accepted human right".
EDITED BY CW Team