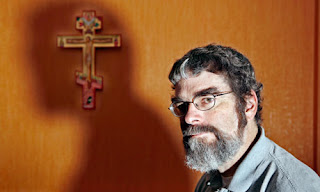 Aliens might have souls and could choose to be baptised if humans ever met them, a Vatican scientist said today.

The official also dismissed intelligent design as "bad theology" that had been "hijacked" by American creationist fundamentalists.

Guy Consolmagno, who is one of the pope's astronomers, said he would be "delighted" if intelligent life was found among the stars.

"But the odds of us finding it, of it being intelligent and us being able to communicate with it – when you add them up it's probably not a practical question."

Speaking ahead of a talk at the British Science Festival in Birmingham tomorrow, he said that the traditional definition of a soul was to have intelligence, free will, freedom to love and freedom to make decisions. "Any entity – no matter how many tentacles it has – has a soul." Would he baptise an alien? "Only if they asked."

Consolmagno, who became interested in science through reading science fiction, said that the Vatican was well aware of the latest goings-on in scientific research. "You'd be surprised," he said.

The Pontifical Academy of Sciences, of which Stephen Hawking is a member, keeps the senior cardinals and the pope up-to-date with the latest scientific developments. Responding to Hawking's recent comments that the laws of physics removed the need for God, Consolmagno said: "Steven Hawking is a brilliant physicist and when it comes to theology I can say he's a brilliant physicist."

Consolmagno curates the pope's meteorite collection and is a trained astronomer and planetary scientist at the Vatican's observatory. He dismissed the ideas of intelligent design – a pseudoscientific version of creationism. "The word has been hijacked by a narrow group of creationist fundamentalists in America to mean something it didn't originally mean at all. It's another form of the God of the gaps. It's bad theology in that it turns God once again into the pagan god of thunder and lightning."

Consolmagno's comments came as the pope made his own remarks about science this morning at St Mary's University College in Twickenham. Speaking to pupils, he encouraged them to look at the bigger picture, over and above the subjects they studied.

"The world needs good scientists, but a scientific outlook becomes dangerously narrow if it ignores the religious or ethical dimension of life, just as religion becomes narrow if it rejects the legitimate contribution of science to our understanding of the world," he said. "We need good historians and philosophers and economists, but if the account they give of human life within their particular field is too narrowly focused, they can lead us seriously astray."

The pope's astronomer said the Vatican was keen on science and admitted that the church had got it "spectacularly wrong" over its treatment of the 17th century astronomer Galileo Galilei. Galileo confirmed that the Earth went around the sun – and not the other way around – and was charged with heresy in 1633. He spent the rest of his life under house arrest in Tuscany. Only in 1992 did Pope John Paul admit that the church's treatment of Galileo had been a mistake.

Consolmagno said it was a "complete coincidence" that he was speaking at the British Science Festival at the same time as the papal visit.