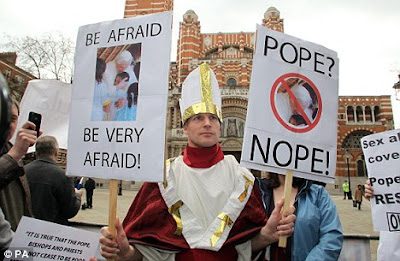 Protesters gathered outside the main Catholic church in the UK today to call for the Pope's resignation over clerical sex abuse.

They claim that Pope Benedict XVI was complicit in protecting priests accused of child sex abuse from prosecution.

As such many object to the pontiff's planned state visit to the UK in September.

He said that the Pope 'bears personal responsibility for the cover up'.

Last week, the Pontiff apologised to victims of child sex abuse in Ireland.

In a letter, he wrote: 'You have suffered grievously and I am truly sorry.'

But many believe that more could have been done to prevent abuse and report those responsible to the authorities.

The Pope himself has been subjected to increased scrutiny over how he dealt with sex abuse cases in the past.

As Cardinal Joseph Ratzinger he was involved in the decision to send Rev Peter Hullermann, accused of abusing boys, to Munich for therapy. He was allowed to return to pastoral duties just days later. Hullermann was eventually convicted in 1986.

The church has insisted the then Cardinal Ratzinger was unaware of the decision to allow Hullerman to return to pastoral work.

But the New York Times reported on Friday that he was included on a memo stating that this would be the case.

The Pope also stands accused of intervening to halt a church trial of Father Lawrence Murphy, an American priest alleged to have abused up to 200 deaf boys between 1950 and 1975.

Cardinal Ratzinger was head of the Congregation for the Doctrine of the Faith that told bishops in Wisconsin to halt a 1997 trial of Murphy.

The Vatican has defended this decision of the grounds that Murphy - who died a year later - was of an advanced age and that the abuse dated back decades.

But protesters said the cases show up the Pope's failings when it comes to reporting abusers.

Mr Tatchell said: 'The buck stops with him and he should resign.'

The activist added: 'The Pope has played a direct personal role in covering up sex abuse. He should resign.

'The evidence shows that the Pope was an accomplice in covering up sex abuse. He should be investigated with a view to prosecution.'

Some of the congregation in Westminster confronted Mr Tatchell and his fellow protesters.

Pointing towards Mr Tatchell, one man shouted: 'The first Pope is Peter and he thinks that's him.'

Ellen Carhill, 66, an Irish Catholic, said: 'The Pope will never resign, it is not possible. He can only apologise for what other people have done.'

She added: 'Instead of letting it rest they are going to town on this. How are things going to get better if they prolong it?'

The Pope today indicated that his faith would give him the courage not to be intimidated by critics.

The 82-year-old pontiff led tens of thousands of people in a sunny St. Peter's Square in a Palm Sunday service at the start of Holy Week events commemorating the last days in Jesus's life.

While he did not directly mention the scandal involving sexual abuse of children by priests, parts of his sermon could be applicable to the crisis he and his Church are facing.

The pontiff said faith in God helps lead one 'towards the courage of not allowing oneself to be intimidated by the petty gossip of dominant opinion'.

He also spoke of how man can sometimes 'fall to the lowest, vulgar levels' and 'sink into the swamp of sin and dishonesty'.

One prayer read at the Mass asked God to help 'the young and those who work to educate and protect them', which Vatican Radio said was intended to 'sum up the feelings of the Church at this difficult time when it confronts the plague of paedophilia'.

As the scandal has convulsed the Church in the United States and Europe, the Vatican has gone on the defensive, attacking the media for what it called an 'ignoble attempt' to smear Pope Benedict and his top advisers 'at any cost'.

But on Saturday, the Vatican's chief spokesman acknowledged that the Church's response to cases of sexual abuse by priests is crucial to its credibility and it must 'acknowledge and make amends for' even decades-old cases.

'The nature of this issue is bound to attract media attention and the way the Church responds is crucial for its moral credibility,' the Vatican's chief spokesman, Father Federico Lombardi, said on Vatican Radio.

Although the cases cited happened long ago, 'even decades ago, acknowledging them and making amends to the victims is the price for re-establishing justice and looking to the future with renewed vigour, humility and confidence', Lombardi said.

Sunday marked the start of a hectic week during which the Pope presides over seven major events leading up to Easter.

They just don't get it. Lombardi speaks of making amends regarding cases that occurred "even decades ago." As if the mere passage of time should somehow nullify the critical role that honesty, from perpetrators and enablers, plays in the healing of a wound as deep as that from sexual abuse. It often takes "decades" before a victim can even deal with the psychological and emotional impact of sexual abuse -- and then the intensity of the pain is as if the events had just happened. These men are ignorant, and they continue to try to minimize the seriousness by highlighting the passage of time. That's abusive behavior as well. If they really want to repent, understand, and make significant changes, it's critical they call on the expertise of the victims and competent psychologists. Otherwise, it's just pious verbiage.

These protests are long overdue. It's time for the Vatican to face international criminal investigations.