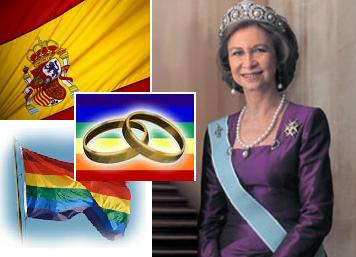 The elegant Spanish Queen Sofia is known for many things - her lacy mantillas at royal weddings, her compassionate embraces, her grandmotherly photo-ops, and above all, her discretion.

But now, as she approaches her 70th birthday after three decades on the throne alongside the popular King Juan Carlos, Sofia has revealed her thoughts on everything from gay marriage to teaching religion in schools to Hillary Clinton.

Leaks from a new biography, The Queen Up Close, appeared in El Pais yesterday and are already causing controversy, especially among gay rights groups, who seemed to like her better with her lips closed.

"I can understand, accept and respect that there are people of other sexual tendencies, but should they be proud to be gay? Should they ride on a parade float and come out in protests? If all of those of us who aren't gay came out to protest we would halt traffic," she said in the book, written by Spanish journalist Pilar Urbano.

The discreet queen proceeded to even more sensitive ground, referring to Spain's recent law to legalize gay marriage, which provoked the fury of the Catholic Church hierarchy. "If those people want to live together, dress up like bride and groom and marry, they could have a right to do so, or not, depending on the law of their country, but they should not call this matrimony, because it isn't," she is quoted as saying. "There are many possible names: social contract, social union".

The State Federation of Lesbians, Gays and Transsexuals immediately asked the Queen to retract her comments.

"Many mothers of gays and lesbians are going to ask why the Queen understands that the Prince would marry a divorced woman, but she can't understand why other mothers wouldn't want that same happiness of marriage for their children," said the federation president Antonio Poveda.

Returned to the throne by Franco, the Spanish monarchy has had to earn the affection of the Spanish people, and support is generally strong in gratitude for King Juan Carlos's role in the transition to democracy.

The favourable opinion stems in part from the pact of neutrality by which the monarchs do not take sides on matters of national politics – allowing all factions to believe royalty on their side.

The row over gay rights overshadowed the Queen's comments on other thorny matters, such as the teaching of religion in the schools, which she considers necessary "at least to a certain age."

"Children need an explanation of the origin of world and of life," she said. She similarly followed the lines of the Catholic Church on abortion, which is legal in Spain.

Fans of political gossip, meanwhile, are enjoying her take on the former Prime Minister Jose Maria Aznar, who was said to have a strained relationship with the monarchs. "He wasn't unpleasant with us," she is quoted as saying. "Perhaps something about his demeanour, his serious expression, didn't help him?"

By contrast, she bonded with Hillary Clinton: "They make her out to be an ambitious woman who uses her husband's influence to her own benefit. The poor thing must have suffered a great deal."

Lately some regional nationalists, especially in Catalonia, have been increasingly vocal in their anti-monarchical sentiment, with some youth activists burning photos of the king and queen, once unthinkable.