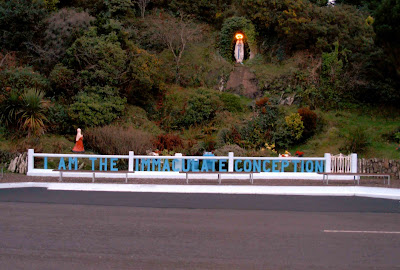 National debates on social issues, such as during the Lisbon Treaty referendum campaign, could trigger moving statues or even apparitions, it was claimed today.

US-based academic Eugene Hynes believes that divisive discussions on divorce and abortion during the 1980s brought people closer to religion.

Claims of moving statues in Ballinspittle, Co Cork during 1985 sparked dozen of similar paranormal sightings in other areas.

“The apparitions and moving statues in the mid 1980s were not unconnected to what many people felt were changes undermining the traditional family in Ireland,” said sociology lecturer Mr Hynes.

He added: “There was all the political debates on divorce and saturation media coverage of notorious cases like the Kerry Babies.”

The academic at Kettering University in Michigan said there were also increases in apparitions in other countries in the 1980s.

Mr Hynes, a native of Co Galway, has written a book on the Marian shrine in Knock, Co Mayo which still attracts 1.5 million pilgrims each year and has an international airport.

In August 1879, more than a dozen villagers saw a bright silvery-white light outside the gable of the local Catholic church.

They claimed they saw the Virgin Mary, St Joseph and St John the Evangelist for several hours but the life-size figures did not speak or move.

A later investigation by a panel of priests concluded that the witnesses’ testimonies were satisfactory.

Mr Hynes draws on unpublished local history documents which trace the social and cultural background to the apparition.

Local people believed that Knock would be kept safe from an imminent famine and began to pray daily for divine help.

The Land War also provoked a crisis among priests because the clergy supported the local landowners over the tenants.