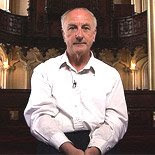 LAWYERS in the United States are considering offering a reward for information on the whereabouts of defrocked paedophile priest Oliver O'Grady.

O'Grady was deported to Ireland in 2000 after spending seven years in prison in the US for sexually abusing two boys.

Now solicitors representing child abuse victims in the US are to take out ads in Irish newspapers in an attempt to serve him with papers relating to more civil actions.

"We have no idea where he is," Patrick Wall of Manly, McGuire and Stewart in California said.