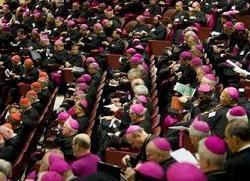 The working sessions of the Twelfth Ordinary General Assembly of the Synod of Bishops ended Saturday morning when the Synod Fathers approved 55 propositions to present to Pope Benedict XVI.

The Pope has ordered the publication of a provisional and unofficial Italian-language version of the propositions.

This marks the second time that Pope Benedict has allowed the publication of the closing propositions of a synodal assembly, the Vatican Information Service reports.

Normally the propositions are presented privately to the Pope, who considers them as he prepares the official closing document of a Synod, the Apostolic Exhortation.

The first part of the list, “The Word of God in the Faith of the Church,” focuses on the duty of pastors to educate the faithful to help them strengthen their relationship with Jesus Christ, through reading and meditating upon Scripture.

The Synod also asks pastors to be “sensitive to the rediscovery of natural law and its function in the formation of consciences,” saying the “great progress of science” in its knowledge of the natural world can obscure the ethical message of nature.

The propositions analyze the relationship between the Old and the New Testaments, after which they note that the poor are “in need not only of bread but also of the words of life” and have a preferential right to know the Gospel.

In the second section of the Synod’s propositions, focused on the theme “The Word of God in the Faith of the Church,” the Synod Fathers suggest that the Bible be placed in a visible position inside churches. They state that the Word of God must be clearly proclaimed by people who have “familiarity with the dynamics of communication.”

The Synod propositions stress that a homily must be well-prepared, keeping in mind the day’s biblical readings, what the readings mean to the priest, and what he must say to the community in response to their situation. Though the liturgy of the Word is a privileged place for encountering Christ, it must not be confused with the liturgy of the Eucharist.

One of the propositions reflects the Pope’s suggestions that scriptural interpretation ought to follow the Second Vatican Council’s Dogmatic Constitution Dei Verbum in attending to both the historical and the theological aspects of Scripture. Pope Benedict had said in an address during the Synod that where the interpretation of faith is lacking, “positivist or secularist” interpretations will arise which exclude the divine from human history.

Promoting “lectio divina,” the prayerful reading of Scripture, is also emphasized in the Synod’s propositions.

Encouraging the laity in their efforts to transmit the faith, the Synod Fathers’ propositions underline the indispensable role of women especially within the family, in catechesis, and in the lectorate.

The final part of the list of propositions, “The Word of God in the Mission of the Church,” discusses the Word of God and liturgical art and the translation and interpretation of the Bible. Warning against sects and fundamentalist readings of the Bible, the propositions highlight the importance of the communications media for evangelization.

The section also discusses the promotion of pilgrimages, the study of Holy Scripture in the Holy Land, and the relationship between the Word of God and environmental protection.

Discussing dialogue with Jews and Muslims, the Synod Fathers call for inter-religious dialogue to be strengthened, insisting “that all believers be effectively guaranteed the liberty to profess their religion in private and in public, and that freedom of conscience be recognized.” The bishops suggest episcopal conferences should promote meetings and dialogues with Jews.

According to the Synod Fathers, “reciprocity” and freedom of conscience will be an important part of dialogue with Muslims.

The final proposition of the Synod is dedicated to the Virgin Mary as the model of the Church’s faith and suggests that the faithful be further encouraged to pray the Angelus and the Rosary.