Indian leader meets with the Pope 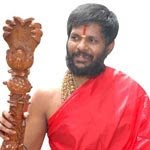 India’s most famous world peace leader, His Holiness Sri Vasanth Gurudevji, has met with the Holy Father Pope Benedict XVI at St Peters Square, Vatican City, Italy to discuss his views and personal mission to highlight the urgent need for World Peace and to meet the Millennium Development Goals.

During the meeting Pope Benedict XVI congratulated Gurudevji and encouraged him for raising awareness for the good causes.

Gurudevji informed his Holy Father of the recent 10-day Millennium Development Goal and World Peace Festival which he organised in Leicester from September 30-October 9.

The festival included 10 days of prayer or ‘Maha Poojans’, where each day was dedicated to one of the UN Millennium Development Goals.

The pinnacle of the festival was a Guinness World Record attempt where Gurudevji along with thousands of world peace followers lit 66,840 candles to signify the world’s total population of 6,684 billion, together with an additional 195 coloured candles to represent the total countries across the globe.

At the festival, Gurudevji was also presented with a special award by the World Peace Federation who congratulated him for his work in promoting world peace.

Gurudevji presented his Holy Father with the World Peace Book, which was conceptualised by Gurudevji to teach and enlighten people on the subject of peace and to prompt individuals to learn from past sufferings which have been a result of violence.

His World Peace Book was an inspiration for people from all religions and includes messages from an array of religious Saints, political leaders and other VIPs, such as from Lord Mahavira the Great Saint of Jainism and His Holiness The Dalai Lama.

The book is encapsulated by a golden case with an everlasting sandalwood fragrance and the book will be distributed free of charge to most of the 195 world leaders as well as peace activists and socialists around the globe.