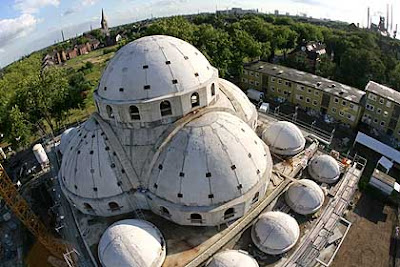 A grand mosque with room for 1,200 faithful was inaugurated Sunday in the German city of Duisburg, but the event was free of the recriminations that have soured a mosque building plan in nearby Cologne.

Christian leaders spoke at the ceremonial opening and the City of Duisburg Philharmonic Orchestra played as well as Turkish bands. Police said there were no protests.

In an inaugural speech, the premier of North Rhine Westphalia state, Juergen Ruettgers, affirmed the right of 3.3 million Muslims in Germany to build mosques as big as they liked.

"We need more mosques in this country, not in inner courtyards, but visible and recognizable ones," he said.

However, plans to build a large mosque in Cologne has seen some civic leaders protesting, arguing that a planned mosque is "too big". There was rioting last month as protestors tried to hold an anti-Islam rally.

Some commentators have noted the demographic difference between the two towns, Duisberg is primarily working-class, while Cologne is much more affluent and middle-class.

In the suburb of Duisberg Muslims make up about one-third of the population, but planners incorporated some changes to the design, including large windows and a ban on a call to prayer from loudspeakers in the minaret.