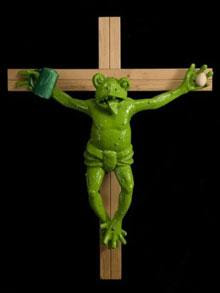 Corinne Diserens, the Swiss director of the museum in Bolzano, in the mountainous north-east of Italy, was dismissed after months of controversy over the bright green, bug-eyed amphibian, which is nailed to a cross and holds a frothing mug of beer and an egg.

She had refused to remove the work by the late German artist Martin Kippenberger despite protests from the Vatican that it was blasphemous.

She said the museum had a right to artistic freedom, and kept the frog on display as originally planned from May to September.

But a majority of the museum's board of directors disagreed and instead dismissed her this week.

The official reason given by the museum was that Ms Diserens had caused a "difficult financial situation" by overspending her budget, but supporters said she was being punished for the row over the frog.

Her sacking prompted a debate on contemporary art in the German-speaking region of Alto-Adige, where a far-right party with anti-immigration views tripled its support in local elections this week, becoming the province's second most powerful political force.

"The relationship between art and politics is never an easy one, but to be sacked because of one work of art is really incredible," said the head of a gallery in nearby Trento, Fabio Cavallucci.

Pope Benedict XVI condemned the four-foot-high frog, entitled Zuerst die Fuesse (Feet First), when he heard about it during his summer holiday in the nearby town of Bressanone.

He said it "injured the religious feeling of many people who see in the cross the symbol of the love of God and of our salvation which deserves recognition and religious devotion".

The Vatican wrote a letter of support in the pope's name to Franz Pahl, president of the regional government, who was so outraged by the sculpture that he went on a hunger strike to demand its removal and had to be taken to hospital during the summer.

"Surely this is not a work of art but a blasphemy and a disgusting piece of trash that upsets many people," he said at the time. "This decision to keep the statue there is totally unacceptable. It is a grave offence to our Catholic population," he said.

Ms Diserens had accused local politicians in the staunchly Catholic region of trying to exploit the issue ahead of the provincial elections.

Museum curators maintained that Kippenberger's frog, with its tongue out and wearing a loincloth, was a self-portrait of the artist "in a state of profound crisis" and was not an attack on the Church.