Gay priest is true to his faith, at odds with his church 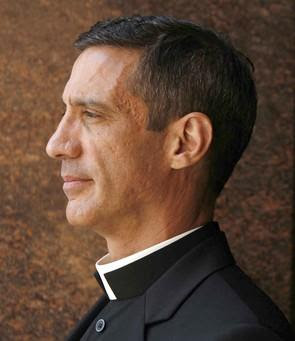 So who is this Catholic priest from Fresno who stood up and spoke out against Proposition 8, putting his career on the line?

As a gay man who finds the church's views on homosexuality so objectionable, why has he been a priest for more than 20 years and subjected himself to such moral conflict?

After reading my colleague Duke Helfand's story about Fr. Geoffrey Farrow and his recent career-suicide from the pulpit, I was curious.

Farrow agreed to meet me for lunch in the middle of a schedule that's gotten very busy since he became persona non grata to his employer. He's been asked to appear all over the state for rallies against Prop. 8, which would amend the California Constitution to say marriage can only be between a man and a woman.

Father Farrow, who was suspended by his bishop two weeks ago, strolled into the lobby of the Kyoto Grand Hotel in downtown Los Angeles wearing the collar.

"I'm still a priest," he said over lunch, though he fully expected to be disciplined for speaking to his congregation about Prop. 8 and wouldn't be surprised if he's ultimately fired.

For the moment, he's staying with friends in Los Angeles. Farrow, 50, doesn't know what he'll do after the election. He was suspended without pay and said his medical benefits run out at the end of the month.

Farrow, who lived in Cuba until the age of 4, grew up Catholic in Florida and knew as a teenager that he was gay. He dated girls "to keep up appearances" but was miserable about it, and he began questioning his faith.

"If God is omnipotent, why is there evil in the world?" he asked himself as body bags returned to the U.S. from Vietnam.

He looked into agnosticism and atheism, neither of which offered the answers he wanted. In his first year of college in Florida, he studied philosophy, read Cicero and mused on the meaning of history, civilization and the nature of God.

"I have a hunger for the transcendent," Farrow said. "This is too precise," he said of man and the universe, "to be a coincidence." And so he became a believer, once more, in the church he had been "carried to in diapers."

When I told Farrow that as an agnostic, I don't understand that leap, he described God as love and faith as trust.

"Trust is fundamental of all human relationships," he said. "Part of the attraction of the relationship with that person is that you're always familiar with them and yet always discovering them."

I love and trust my wife, I said, but she's real and doesn't need to prove that she exists.

"Precisely," Farrow said with a smile, as if I'd described his relationship with God.

When his family moved from Florida to Redondo Beach in the 1970s, Farrow, still closeted as a gay man, joined St. John's Seminary in Camarillo.

"That's a valid question," he said, but he believes he was addressing his spiritual rather than sexual identity in becoming a priest.

Wasn't it a suffocating compromise? I asked. He had given himself over to a church that has, despite moderating its views in recent decades, condemned homosexuality and marginalized gays, even though in Farrow's opinion a sizable percentage of priests are gay.

Farrow conceded that he has considered church teachings "monstrous," especially given the history of violence and suicide victimizing gays.

But he said he has always believed in the church, if not in the men who led it. It's like loving a family member despite a falling out, or loving your country even as you doubt its leaders.

"I'm not happy with the current administration," Farrow said, "but I haven't shredded my passport."

I asked if he'd had any relationships while serving as a priest.

Yes, he confessed. He seemed near tears and stopped short of sharing the details. But he said it had ended.

I wondered again how anyone could go through such an ordeal and remain committed to a church that considers it a sin for a gay person to act on biological urges. Whom do you even talk to for help? I asked.

"There are a lot of clergy who deal with this," Farrow said, telling me many priests in the Fresno diocese are gay. "You speak to each other."

But that's a form of silence as well as hypocrisy, and Farrow was increasingly troubled by his double life. Not long ago, he saw a woman crying in a church hallway and asked what was wrong.

"My son just came out to me," she said. "I was having a dinner party and I told him he couldn't bring his boyfriend."

"Do you know what you just did?" Farrow asked her. "You just told your son he was not as important to you as your dinner guests."

Farrow then had his epiphany when he was asked by a Prop. 8 supporter in Fresno to speak up in favor of the measure. He knew he couldn't and that in fact he had to do just the opposite.

"I am morally compelled to vote no on Proposition 8," he told his congregation, saying he had to break "a numbing silence" about church prejudice against homosexuals.

Among the critics in his own parish and beyond, there are those who quote the Bible to condemn homosexuality and gay marriage.

"The Bible is not a book, it's a library written over 15 centuries," Farrow told me, suggesting that Christianity has and should continue to evolve. "People who approach scripture in a literal fashion are attempting to manipulate God himself."

To Farrow, condemning gay and lesbian marriage is as offensive as the condemnations of interracial marriage not too many decades ago.

" 'Think about the children,' they said, and they're doing the same with this," Farrow said indignantly. "If a child is raised in a home where he's loved, that's a good home."

So why not just quit his job rather than wait to get fired?

Farrow said he still sees the church as home, and believes his new mission is to force this issue whether he's wearing a collar or not.

"They said I've caused scandal to the church," he said. "I think the real scandal is the thousands of gay and lesbian children who feel abandoned by the church of their baptism."

When he was in seminary, Farrow interned as deacon at St. Vincent's Medical Center and worked with terminally ill patients. As the end nears, Farrow told me, people say the things they never could utter. They are "more alive than ever . . . because they realize the futility of fear." He found them all contemplating the same questions.

"Were you true to your conscience? Did you do what you felt was right?"

If Geoffrey Farrow can be true to his Catholic faith while supporting same-sex "marriage", then Muslim clerics can be true to their Muslim faith by eating chitterlings.