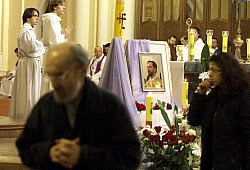 Two Jesuit priests found slain in their central Moscow apartment might have been killed a day or two apart, a senior Catholic official said Thursday.

Otto Messmer, 47, a Russian citizen and top Jesuit in Russia, and Victor Betancourt, a 42-year-old Ecuadorian citizen, were found dead with battered skulls in an apartment on Ulitsa Petrovka on Tuesday evening.

Father Igor Kovalevsky, the general secretary of the Conference of Catholic Bishops of Russia, said Betancourt was killed "earlier," but it was unclear if it was a matter of hours or days.

He said he last spoke to Betancourt on Friday evening. The priest was planning to hear confessions on Sunday at St. Louis Catholic Church on Malaya Lubyanka but didn't turn up.

The other priest, Messmer, was killed after he returned from a trip to Germany on Monday evening, Kovalevsky said.

The Investigative Committee released a statement on Wednesday saying that the deaths had probably occurred 24 hours before the bodies were found. A spokeswoman said Thursday that she could not make any further comment while the investigation continued.

Both priests came to St. Louis Church every Sunday to hear confessions, Father Eduard Shatov, a priest at the church, said Thursday.

"For all of us, it's a really tragic event," he said. "We are shocked, and we don't know what is happening because the police are making their inquiry."

Shatov said he had visited the apartment on Ulitsa Petrovka. Another priest who lives there is traveling in Belgium, he said.

The bodies were found by members of the order and accountant Pavel Subbotin, Kovalevsky said.

Interfax reported that witnesses saw a short man, age 40 to 45 with Latin American features and wearing a blood-stained white shirt near the apartment. The Rusbalt.ru web site quoted an anonymous police source as saying investigators are looking for a Cuban man who studies at the People's Friendship University.

Several newspapers have speculated that the crime might have had a sexual motive. Kommersant quoted a police source as saying two used condoms were found at the scene.

Kovalevsky said he had no comment about reports in the "yellow press." "We only trust the work of the investigators. It's up to everyone's conscience whether or not they believe the reports," he said.

The Investigative Committee statement said a "domestic incident" might have led to the deaths, saying there were "traces of a party" in the apartment. Gazeta.ru reported that open wine and absinthe bottles were found in the kitchen.

Mourners packed the Immaculate Conception Cathedral on Malaya Gruzinskaya for a requiem mass for the priests Wednesday evening, Shatov said. The Archbishop of Paris, who is in Moscow to visit Russian Orthodox Patriarch Alexy II, attended the service, together with about 40 priests.

The Jesuits' top priest, Adolfo Nicolas, issued a statement calling for Jesuits to pray for the slain men.