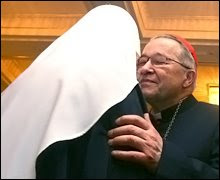 Relations between the Roman Catholic and the Russian Orthodox Churches have been rocky for centuries. But amid these difficulties a top Catholic official is visiting Moscow for the first time.

The head of the French Catholics was invited by Russia's Patriarch Alexy II.

Jean-Francois Thiry swapped his native Belgium for Russia more than 15 years ago. A Catholic himself, he heads a cultural centre in Moscow promoting unity among all Christians. It’s a place where Catholic and Orthodox books stand side by side on the bookshelves.

“I think it’s a very big scandal that the church is still divided. Lots of people are not coming to the church because they say: how can I come to a church that is divided? Where is the truth?” wonders Jean-Francois Thiry, Director of “Library Of The Spirit” Cultural Centre.

Eastern Orthodoxy and Roman Catholicism broke ties in 1054 and have remained separate ever since. For centuries, relations between the Vatican and the Russian Orthodox Church were frosty. But they’re warming up again. For the first time, the head of the French Catholics has come to Russia, invited by Patriarch Alexy II.
“We face many common challenges and our churches have to address them together,” Alexy II, Patriarch of Moscow and All Russia, said.

The Archbishop of Paris, Cardinal Andre Vingt-Trois, and the Russian Patriarch have met before. A year ago Alexy II’s first ever trip to France was heralded as historic. But he has refused all invitations from Rome, with the Russian Orthodox Church opposing a visit by the Pope.

“Last year we started a link between the Russian Orthodox Church and the Catholic Church in France. We want to develop this link and make it fruitful,” the Archbishop said.

However, strains remain. The Russian Orthodox Church has accused the Vatican of seeking to poach converts in Russia and some post-Soviet states, like Ukraine, that it regards as historically Orthodox.

But Vladimir Legoyda, the editor of an Orthodox magazine, believes the two churches have no option but to leave their disputes in the past.

“It will be an attempt to answer the challenge of secularism, of society that’s trying to live without God,” Vladimir Legoyda says, Editor-In-Chief of Foma Magazine.