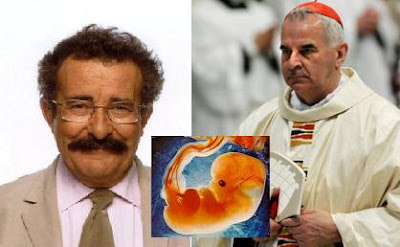 There was angry reaction yesterday to comparisons made by the leader of the Roman Catholic Church in Scotland between the Government's Human Fertilisation and Embryology Bill, and medical experiements carried out by the Nazis during the Second World War.

Cardinal Keith O'Brien described the implications of the legislation as “grotesque” and akin to “behaviour last seen under the Nazis”. In an open letter, he said he was appalled that Gordon Brown was promoting the Bill.

Lord Winston, the medical academic, said yesterday that the Cardinal's comments were unacceptable. He added that extreme remarks polarised opinion and did not do the Catholic Church justice.

The Labour peer told BBC Scotland: “It might be worth reminding the Cardinal that, actually, the Catholic Church knew about the Nazi experimentation, even before the war, not just after it, and did very little to prevent it from happening.”

Dr Rowan Williams, the Archbishop of Canterbury, during a debate at Glasgow University last night, said: “I have two things to say. One is that comparisons with Nazi Germany are always a tempting conversation stopper and must be used sparingly.

“I am concerned by that aspect of genetics which encourages us to think of human tissue or organs in a more functional way. It's a nebulous thing but there is a dangerous drift of thinking not about what we are as humans but what use we are. That is not to knock down stem cell research, but if I have a moral worry that would be it,” he added.

The Bill, which was debated last night in the House of Lords, would allow cells to be taken from incapacitated adults and children on the basis of presumed consent to be used for embryo research.

In his letter Cardinal O'Brien wrote: “The grotesque implications of these procedures are utterly horrifying and fly in the face of all medical guidance on consent to research.”

The Cardinal added that such behaviour was last seen under the Nazis, and urged Mr Brown to urgently amend the legislation. Admitting that he had made the remarks to gain publicity, he said that he did not see why people were offended.

The Cardinal told BBC Scotland that he wanted people to pay attention to the issue, adding: “Yes, I want publicity and I use strong language so that I'll get publicity.” He said that he had not intended to cause offence by invoking the Nazis, adding: “I don't see why anybody should be offended by the language I use.”

Labour MP Jim Sheridan, who is a Catholic, accused the Church of “scaremongering”, and said that a more measured approach was needed. The MP for Paisley and Renfrewshire North said that Cardinal O'Brien's remarks were very far from reality, adding: “Winding people up is not consistent with the teachings of the Catholic Church.”

Meanwhile, the Government last night defeated a move in the Lords to place further restrictions on the use of human-animal embryos.

The attempt by the crossbencher Lord Alton of Liverpool to restrict research on admixed embryos to cases where it could not be carried out by any other method was rejected by the House of Lords by 202 votes to 39, a majority of 163.