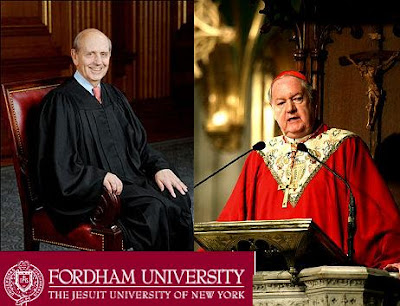 Fordham University Law School’s plan to give an award to the Supreme Court justice Stephen G. Breyer on Wednesday night has drawn criticism from Cardinal Edward M. Egan and some students and alumni, because of the justice’s support for abortion rights.

“As a result of these discussions, the cardinal is confident that a mistake of this sort will not happen again,” he said.

Patrick J. Reilly, a Fordham graduate and president of the Cardinal Newman Society, a Virginia-based group dedicated to policing the borders of Catholic orthodoxy within Catholic colleges and universities, said Tuesday that the society had helped gather signatures from 1,100 alumni, students and others demanding that the award be rescinded. He called the decision to honor Justice Breyer “an affront” to church teachings against abortion.

Bob Howe, a Fordham spokesman, said that the award would be bestowed as scheduled at a dinner on Wednesday evening in Manhattan, and that the university would have no further comment on the decision.

Justice Breyer wrote the majority opinion in the Supreme Court’s 2000 decision overturning Nebraska’s ban on late-term, or so-called partial-birth, abortion. One of the reasons he cited was that the law was unconstitutional because it made no exception for situations in which the mother’s health was at risk.

He is not the first supporter of abortion rights to receive the Fordham ethics prize, established in 1976 to recognize “individuals whose work exemplifies outstanding standards of professional conduct, promotes the advancement of justice and brings credit to the profession” of the law. But other members of the court who joined in opinions upholding abortion rights — Justice Ruth Bader Ginsberg, who received the prize in 2001, and former Justice Sandra Day O’Connor, who was given the award in 1992 — did not draw criticism from Catholic activists and the hierarchy.

Asked why those awards were not protested by Catholic officials, Mr. Zwilling said that “the others apparently did not come to our attention.”

In recent months, the Cardinal Newman Society, which brought wide attention to this year’s award, has become increasingly outspoken in its criticism of Catholic university officials perceived as less than faithful to church doctrine.

On Oct. 9, Mr. Reilly labeled it “a serious scandal” when Pamela Trotman Reid, the president of St. Joseph College in West Hartford, Conn., was quoted in The Hartford Courant as saying she was “concerned about the right of women to make choices about their own health” if John McCain became president.

Boston College came in for criticism this month when it was the host of a meet-and-greet event featuring Meghan McCain, the Republican presidential candidate’s daughter. Mr. Reilly protested that her father’s support for stem cell research “has extended even to embryonic stem cell research, a practice consistently opposed by the teaching of the Catholic Church.”