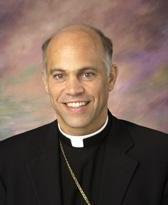 Salvatore Cordileone, auxiliary bishop of the San Diego diocese, has written to San Diego Mayor Jerry Sanders and the San Diego City Council as the council considers on Monday a resolution concerning whether the city will officially oppose Proposition 8.

The bishop’s letter argued that passing the resolution would not represent the consensus of San Diegans and would weaken the family.

“We need to be supporting and strengthening the institution of marriage for the sake of children, not redefining and weakening it,” he wrote.

He began his letter by saying: “Those of us who favor preserving marriage as the union of a man and a woman in California are wondering what ever happened to our democracy.”

Citing the 61 percent of voters who in 2000 passed Proposition 22, which defined marriage as between a man and a woman, Bishop Cordileone charged that the will of this majority was overturned by the California Supreme Court earlier this year.

“Defining marriage as it has been understood in every society since the beginning of the human race is hardly the stuff of which unconstitutional laws consist,” the bishop wrote.

Many people, “trusting in the democratic process,” had expended “vast resources of time, energy and capital” to pass Proposition 22.

The bishop mentioned that the California attorney general had not only refused to stay the Supreme Court decision which overturned Proposition 22, he had “in an unprecedented move,” changed the title of the proposition after its qualification for the ballot in a way that “prejudices” the wording.

Bishop Cordileone also decried the repeated theft of “Yes on 8” signs and the severe beating of a Proposition 8 supporter in Modesto.

“And yet, not a peep from our elected officials decrying this violence and intolerance,” he commented.

Noting how he had previously written a letter to the city council stating that the issue was divisive, he commented: “The experience over this last year has more than adequately demonstrated that it is true.”

Saying that the San Diego city council could speak for the entire city, the bishop asked whether council members had surveyed area residents.

“How can you presume to speak for the entire city when a majority – or at least, a very sizeable minority – is in favor?” he asked.

“Why are our thoughts and feelings not worthy of equal consideration to theirs, especially when we can offer many rational, cogent arguments to justify our position? We support marriage because marriage benefits everyone; we abhor violence and unjust treatment against people who disagree with us. Nonetheless, we are accused of discrimination. Who, though, is being discriminated against now?” the bishop continued.

Bishop Cordileone noted how the city had changed for the worse, witnessing a decline of safety and a decline in secure home life for children.

“What, though, can be a greater benefit to children and young people than growing up with their mother and father married to each other in a low-conflict relationship? We need to be supporting and strengthening the institution of marriage for the sake of children, not redefining and weakening it.”

After charging that same-sex marriage intentionally deprives children of a mother and a father, he appealed to the council members to defeat the resolution opposing Proposition 8.

“After having made such laudatory and inspired commitments to our youth, please, do not now sell them down the river by telling them that it’s not important for them to have a mother and a father.