2009 shaping up as a 'Year of Africa' in Catholicism 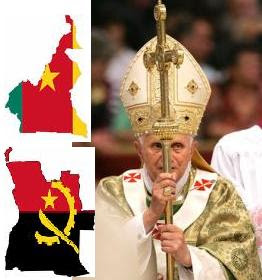 Though there’s been no actual declaration to this effect, unofficially 2009 appears to be shaping up as the “Year of Africa” in the Catholic church.

Three high-profile public events seem destined to ensure that the spectacular growth of Catholicism in Africa, as well as the steep challenges it faces, will be in the limelight throughout the year:

• In March, Pope Benedict XVI will travel to Cameroon and Angola, his first trip to Africa and the 11th foreign trip of his papacy. So far, this is the only papal journey on the calendar for 2009.

• The Symposium of Episcopal Conferences of Africa and Madagascar (SECAM) will hold its plenary assembly, gathering bishops from across the African continent, in Rome Sept. 27-Oct. 3, 2009. The location ensures that Western media and Vatican-watchers will pay far closer attention than is normally the case for SECAM meetings.

• The second Synod for Africa will be held at the Vatican Oct. 4-25, 2009. A follow-up to the first African synod in 1994, this gathering will bring African prelates together with bishops from other parts of the world, as well as Benedict XVI, to discuss the promise and peril of Catholicism in Africa.

Benedict XVI announced plans for his trip to Africa at the conclusion of the Oct. 5-26 Synod of Bishops on the Bible. Though no official dates have been set, the pope’s ambassador in Angola announced in an Oct. 2 press conference that Benedict will arrive in Luanda, the national capital, on March 20 and stay in the country through March 23. Among other things, Benedict XVI will take part in celebrations commemorating the 500th anniversary of the evangelization of Angola in the 15th century.

Prior to his arrival in Angola, Benedict will visit Cameroon, presumably spending two to three days in the country. The official purpose of the visit is to present the Instrumentum Laboris, or working paper, for the Synod for Africa during a SECAM meeting in Yaounde, the national capital.

Both Cameroon, with a population of 17.8 million, and Angola, with 16.9 million, are located in western Africa. The official languages of Cameroon are French and English, while Portuguese is the principal language in Angola.

The official theme of the Synod for Africa is “‘The Church in Africa in service to reconciliation, justice and peace.”

The year-long focus on Africa throughout 2009 is likely to train a spotlight on both the dramatic expansion of Catholicism, as well as the equally dramatic threats faced both by the church and by broader African society.

The explosion of Catholicism in sub-Saharan Africa during the 20th century ranks among the greatest missionary success stories in church history. From a Catholic population of 1.9 million in 1900, the total for sub-Saharan African mushroomed to 139 million in 2000, a staggering growth rate of 6,70 percent.

Moreover, almost half of the adult baptisms in global Catholicism occur in Africa, meaning that the growth of the church has been driven not merely by overall demographic trends but also by success in attracting new converts.

By 2050, three African nations will rank among the ten largest Catholic countries on earth: the Democratic Republic of the Congo (97 million Catholics), Uganda (56 million) and Nigeria (47 million). The traditional Catholic powerhouses of Spain and Poland, meanwhile, are projected to drop off the list.

Vocations are also booming. Bigard Memorial Seminary in southeastern Nigeria, with an enrollment of over 1,100, is said to be the largest Catholic seminary in the world. Its student population by itself is roughly one-fifth the total number of seminarians currently preparing for the priesthood in the United States.

Yet despite this phenomenal harvest, there is no priest surplus in Africa, in large part because Africans are being baptized even more rapidly than they’re being ordained.

The focus on Africa throughout 2009 should thus offer a striking contrast to Western perceptions of contraction and decline in the church, because that is not necessarily the global story.

At the same time, African Catholicism also faces a series of challenges. One is simply keeping pace with the growth, ensuring that new converts receive an adequate formation in the faith and that the church’s infrastructure is capable of serving the pastoral and human needs of ever-expanding congregations.

During the recently concluded Synod of Bishops in Rome, African bishops pointed to two other critical challenges: Islam and Pentecostalism.

Islam too expanded dramatically in Africa throughout the 20th century. Though religious demography in Africa is legendarily imprecise, most estimates say there are roughly the same number of Muslims as Christians on the continent, and often they live in uneasy co-existence. Especially in nations where there is no clear majority – such as Nigeria, Tanzania, and the Ivory Coast – recent decades have witnessed several waves of Christian/Muslim conflict.

In an interview with NCR during the synod, Archbishop John Onaiyekan of Abuja, Nigeria, argued that from an African point of view, Islam merits as much attention from the church as is devoted to the dialogue with Judaism.

“Also, when you come to the mission of the church, the fact is that while the Jews are not interested in evangelization and proselytism, Muslims are vigorously – vigorously – converting people,” he said. “They’re fishing in the same pond with us, so to speak. We have to deal with that.”

The growth of Pentecostalism across Africa, often at the expense of the Catholic church, represents an equally serious pastoral challenge. During the synod, Cardinal Polycarp Pengo of Tanzania, President of SECAM, warned of an “exodus” of Catholics across Africa leaving the church to join various Pentecostal movements.

Bishop Louis Portella Mbuyu of Kinkala, Congo, said that another competitor is gaining strength in Africa these days: a revived form of traditional African religion, with an emphasis on personal liberation.

Beyond these intra-religious concerns, African bishops are also likely to plead for greater attention to the continuing suffering of the continent in the form of chronic under-development, disease, and armed conflict.

The “misery index” for Africa is, by now, wearily familiar:

• The World Bank reports that while East Asia reduced the percentage of people living in extreme poverty, meaning less than $1 a day, from 80 to 20 percent during the period 1981-2005, there was no similar improvement in Africa. In 1981, 200 million Africans lived in extreme poverty, while in 2005 the estimate was 400 million.

• Twenty-one of the world’s thirty must underdeveloped nations are located in sub-Saharan Africa, according to the U.S. Agency for International Development.

• In 2005, some 30 million adults and children were estimated to be living with HIV/AIDS in sub-Saharan Africa, accounting for some two-thirds of the world’s infected persons. Some 1.5 million Africans die each year from the disease. Sub-Saharan Africa accounts for 95 percent of the 15 million children in the world orphaned by AIDS.

• Some 28 sub-Saharan African states have been involved in armed conflicts since 1981, leaving millions dead and generating an estimated 9.5 million refugees and 18-20 million internally displaced persons. According to Oxfam International, armed conflicts cost Africa an estimated $300 billion between 1990 and 2005, an amount equal to the total amount of foreign aid given to Africa over the same period.

• Chronic corruption in many African states is estimated to have cost the continent hundreds of billions of dollars in lost productivity and siphoned resources.

Spokespersons for Africa often protest that these indices of human suffering are neglected or under-reported in the West; according to one study by the watchdog group Media Watch, conflicts in Africa accounted for just two person of conflict coverage in the Western press in the three years immediately following the 9/11 terrorist attacks.