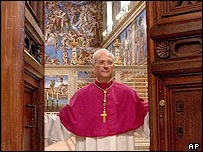 For most people, Archbishop Piero Marini is a face without a name. He’s routinely stopped at airports, restaurants and on the street, usually running into some variant of the same question: “I know I’ve seen you before. Who are you?”

For the record, Marini is that tall, silver-haired, imperturbable Italian cleric who was always at the side of Pope John Paul II, and later Benedict XVI, on Christmas, Easter and any other time the pope celebrated a liturgy in public. He served as the papal master of ceremonies for 20 years, from 1987 to 2007. In that capacity, the Italian state television service RAI estimates that Marini has been seen by more people around the world than virtually any other living figure -- even if the vast majority of them have no idea who he is.

For Catholic insiders, on the other hand, Marini is anything but anonymous. From his position as the pope’s top liturgist, Marini served as the great champion of the reforming spirit in Catholic liturgy associated with the Second Vatican Council (1962-65), making him a darling of church progressives and a bane of the traditional wing. After Joseph Ratzinger himself, though for decidedly different reasons, Marini may have been the most talked-about and dissected figure in the upper echelon of John Paul’s aides.

While Marini’s papal liturgies were always precise and deeply rooted in tradition, he would occasionally push the envelope. It was Marini, for example, who allowed an indigenous Mexican shaman to exorcise John Paul II during the canonization Mass for Juan Diego in Mexico City in 2002, and who permitted scantily clad Pacific islanders to dance for the pope during the opening liturgy of the Synod for Oceania in St. Peter’s Basilica in 1998 -- both under the rubric of “inculturation,” adapting the rites of the church to speak to the experience of local cultures. He also favors local decision-making over centralized Roman control. In fact, both of the envelope-pushing instances cited above originated with requests from local bishops.

For fans and critics alike, therefore, Marini’s Oct. 1 departure as master of ceremonies marked the end of an era. (Today Marini serves as president of the Pontifical Committee for International Eucharistic Congresses.)

This change in role has not signaled Marini’s disappearance as a force in liturgical debates, as witnessed by his new book, A Challenging Reform: Realizing the Vision of the Liturgical Renewal (Liturgical Press). Edited by three American liturgists, the book tells the story of the Consilium, the unique body created during Vatican II (and suppressed just a few years later) to oversee the implementation of the council’s decree on liturgy, Sacrosanctum Concilium.

The Consilium was always an anomaly: it had no juridical authority of its own, yet at the peak of its influence it enjoyed virtually unchallenged sway over liturgical policy; it was led by a wide international assortment of bishops and liturgical experts, most of them not part of the Roman curia; and it consulted widely with bishops’ conferences, national liturgical organizations and publishers of liturgical texts, usually backing their views over opposition from the Vatican. Its crowning result was the Novus Ordo, the new Mass, issued by Pope Paul VI in 1969 to replace the Tridentine rite codified five centuries earlier.