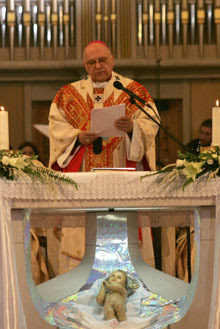 The Roman Catholic Church's highest official in the Holy Land early Tuesday delivered a politically charged appeal for peace and love in the Holy Land and independence for the Palestinian people.

In his Christmas Homily at midnight Mass in the birthplace of Jesus, Latin Patriarch Michel Sabbah spoke out against religious extremism and said Jews, Christians and Muslims must learn to share the Holy Land.

«Any exclusivism that pushes the other party aside or imposes occupation or any other type of submission on it is not in keeping with the vocation of this land,» he said in comments directed at Israel.

«This land of God cannot be for some a land of life and for others a land of death, exclusion, occupation, or political imprisonment.

«Each one knows what it takes to make peace,» added Sabbah, the first Palestinian to hold his position. «It is not up to the weakest to submit themselves and continue to live a life of deprivation. It is up to the strongest, to those who have everything in hand, to detach themselves and to give to the weakest what is due to them.

Sabbah delivered his homily at St. Catherine's Church, next to the smaller Church of the Nativity, built above the grotto where Jesus was born.

Sabbah criticized extremists who turn to violence in the name of God. «Violence cannot claim to be part of any religion,» he said. «Extremism, in all religions, is the desire to appropriate to oneself, to exclude, and to subject others, not to a faith in God, but to human behaviors that are hostile to the others.

Patriarch Michel was allowed through to Bethlehem because it would attract too much adverse publicity at this juncture to forbid such a high profile cleric make the journey for the Christmas feast.

But at the end of October the Israeli authorities extended the restrictions on West Bank Christians, including clergy, not permitting them to travel to religious sites. This embargo has reportedly been maintained for Christmas.

"The Campaign for the Right of Entry released a report on Christmas day, December 25th, revealing that the denials of entry are arbitrary and widespread, and include both members of the clergy and volunteers with Christian organizations working in the Occupied Territories (West Bank and Gaza). This is in addition to tens of thousands of Palestinian and non-Palestinian foreign passport holders who have been denied entry into the Palestinian territories by Israel for stating their intention to stay in the Palestinian territories.

Israeli authorities stepped up enforcement of its entry denial policy last year, leaving tens of thousands of foreign-passport holders stranded outside the Palestinian territories, unable to enter due to Israeli restrictions. The Campaign for the Right of Entry has criticized this move by Israel, calling it a violation of international humanitarian law, in addition to being a blatant restriction on the right to freedom of religion.

Many churches have branches in Bethlehem, and hundreds of international Christian organizations operate in the area as well. In addition, a number of Christian schools depend on foreign teachers to teach. The past year of restrictions have made it extremely difficult for these organizations, churches and schools to continue their work.

The Campaign points out that during this time of spiritual reflection and celebration, when most of the world's media is focusing on Israel's 'easing of restrictions' for one day for pilgrims to attend the Christmas celebration in Bethlehem, the sad reality is that Israel is in fact continuing to deny entry to tens of thousands of Christians who live and work in Bethlehem and throughout the Occupied Territories." (end of quote)