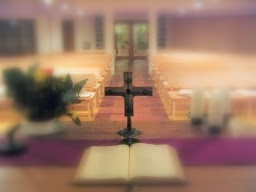 So now it is the sales. Mammon plunges onward, planting his boots (or hers?) in the sludge of what is left after the ancient beano of the Saturnalia.

But what is this?

A rival show in the wings?

A bout between two of the main players in the Christmas celebration, Catholics and Anglicans?

In a flurry of rather out-of-date statistics, the Sunday Telegraph led off its front page with the daring cry that 'Britain is a Catholic country'. The explanation appeared to lie in Sunday Mass attendances exceeding Anglicans' average Sunday attendances. Anglicans were nettled, but clearly recognised it would be unseemly openly to go to war.

"It isn't a competition," declared the Rev Graham Cray, supremo of those who report on Anglican evangelism. "I'm delighted," said he with a diplomatic and vaguely ecumenical clearing of the throat, "to see all Christian denominations flourishing." But is this the whole story? Regrettably, in the real world, churches find themselves very much in competition, however they seek to deny it; and, history being what it is, that competition - in England at least - reaches its apotheosis between Canterbury and Rome.

This is awkward, for the churches are at their least attractive when they allow the wine of triumphalism to go to the head. Seeking to throw one's weight about, asserting that 'we are the top dogs', seems somehow out of kilter with the stainless sage who sought out simple fishermen on the shores of Galilee.

So it is to the credit of all concerned that few - very few - have sought to make hay with the Sunday statistics. "We don't want to be seen to be scoring points over the Anglican Church," said the Catholic Bishop of Portsmouth, "as we are in no way jealous of its position as the national church ¿"

But privately? In Rome? Within the Vatican, a century is like an evening gone. Trends are measured in aeons. Henry VIII's sequestration of the English Church may be nearly five centuries old, but is not forgotten. Anglicanism may be ailing, but its historic riches remain very visible.

Now, though, Rome also has its cares - and they are much more immediate than a tussle with Anglicanism. Much less has been heard recently of the discreet drive to recruit influential Anglicans to the fold.

Some discontented Anglican priests crossed over in the wake of the mounting (and still unresolved) Anglican row over homosexual clergy; but Blair is the first convert to make a splash for some years; and it is socially significant that even he thought it prudent to dally until he shook himself free of the voters' clutches.

No: Rome, in reality, has been on the defensive ever since Paul VI yielded to the diehards and overrode his appointed experts to condemn mechanical means of contraception - and that will be 40 years ago next year. His fiat is now openly defied within the fold - worldwide - in a process described as the 'protestantising' of Rome.

To this must be added the backwash of priestly child abuse which has hit attendances at mass and, accordingly, the collection plate, still the main source of parish income.

The view heard is that Rome thinks Cardinal Murphy-O'Connor much too liberal and much too good at keeping his distance from the Vatican. Significantly, though, the two trends mesh together: for, after nearly 50 years, it is clear that the old guard of the curia has won the ultimate battle of Vatican II.

It is its generals who have hand-picked safe bishops; and John XXIII's notion of 'collegiality' - a sharing of decision-making between bishops and the Pope - is a dead letter. John, who summoned the Council, died just after its launch and his successors have held on to the reins with an iron grip; none more so than that public relations giant, John Paul II - who humiliated his theologians of world status, Hans Kung, Edward Schillebeeckx and Charles Curran when they dared step out of line.

As for who goes to church, we may be witnessing the working out of a new social pattern of behaviour which has affected many spheres of activity, secular as well as sacred.