Ukraine: New edition of the Sacred Scriptures in Ukrainian language 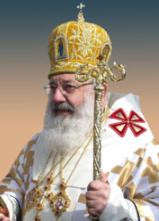 On 22 October, a new edition of the Holy Scriptures in the Ukrainian language was formally unveiled in the Catholic University of the city of Lviv in West Ukraine.

Its publication, in a printing of 100,000 copies, was backed by the Catholic charity Aid to the Church in Need (ACN), which has long been helping the Church in Ukraine in this way - notably with Bibles immediately after the political changes, when there was still no religious literature in the country.

This new edition had become necessary, explained ACN's Ukraine specialist, Marko Tomashek, since there were virtually no Bibles left to be had in the country.

This lack of Bibles had seriously hampered the pastoral work of the Church, he explained. It was particularly important, he continued, that students at the catechetical Institute should be able not only to attend courses in the Scriptures but also to read, study and meditate on the Bible themselves. Christian families must likewise be given the opportunity to possess a Bible.

Currently there are a great many Bible study circles springing up in Ukraine, Mr Tomashek explained, in which students and young married couples in particular are reading the scriptures together.

Without a sufficient number of Bibles in the Ukrainian language, such initiatives will become impossible, he pointed out.

Thus it was "most welcome" that Ukrainian Christians can now at last have access once more to a Bible in their own language, he said.

Cardinal Lubomyr Husar, the head of the Byzantine-rite Ukrainian Catholic Church, which is in union with Rome, was present at the ceremony and stressed the importance of reading the Bible for the Christian faithful.

It was the desire of the Church that the faithful should read the Holy Scriptures, he said, and therefore it was essential that these should be "accessible to all".

He underlined the fact that "the principal author of the Bible is the Holy Spirit" and added, "Therefore we can only understand the Word of God if we entrust ourselves to the guidance of the Holy Spirit".

In March 2006 the Episcopal Synod of the Ukrainian Catholic Church set up a Foundation for the Bible Apostolate and entrusted the preparation of the new edition of the Scriptures to the catechetical commission.