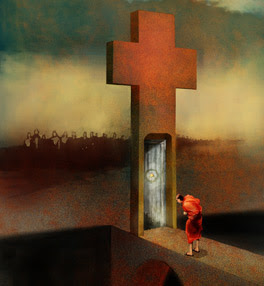 The new course introduced in Spanish schoolrooms this autumn seemed innocuous enough: civic lessons on the meaning of the constitution and the rights that every citizen of Spain can expect.

But the curriculum has become the latest battleground in a raging war between Spain's leftist government and the still-powerful Roman Catholic Church.

Church officials and conservative social activists are trying to have the mandatory courses scrapped, contending that the curriculum promotes ideas that go against church teachings.

Among those is acceptance of homosexuals and, by implication, same-sex marriage, which the government legalized a couple of years ago.

"This is a frontal assault on the Catholic religion," said Sister Maria Rosa de la Cierva, a nun who is the church's liaison to the Education Ministry.

"This is an authentic scholastic war . . . and part of a clear persecution, little by little, of the Catholic faith."

Opponents of the curriculum have mounted a petition drive and claim to have gathered more than 20,000 signatures. They want children to be allowed to declare themselves "conscientious objectors" and boycott the classes.

And they say they are prepared to go to court to press their challenge.

Education is only the latest squabble driving a wedge between the church and the state.

Church officials, a so-called pro-family conservative lobby and rightist opposition politicians have reacted with horror to the government's liberalization of abortion and divorce laws, its reduction of state funding for churches and its efforts to better separate church and state.

At the heart of the conflict is a Vatican-backed effort by Spanish conservatives to restore traditional Catholicism to a place of importance in public life -- and to recapture the power and influence that go with that.

The Socialist government, however, sees the promotion of secular values and its socially liberal agenda as essential to the nation's modernization, especially in today's fast-changing, multicultural Spain.

Modern Spanish history is replete with the ups and downs of tumultuous relations between the church and state. As the renowned Basque writer Pio Baroja once put it: Spaniards through the ages have followed their priests -- either with candles, or with clubs.

A deadly wave of anti-clericalism swept Spain in the 1930s, when another leftist government was trying to modernize the state and push aside a Catholicism that had reigned for centuries.

In extreme cases, priests who resisted the changes were jailed, even killed, and churches burned.

It became one of the pretexts seized upon by Gen. Francisco Franco to attempt overthrowing the government in a 1936 revolt that launched Spain's devastating civil war. Once he won, Franco declared Catholicism the official religion, and the church and its priests gained enormous clout.

Under Franco, Catholic instruction became compulsory in school. To this day, under a treaty that Franco signed with the Holy See, Spain is obliged to offer Catholic instruction in all public schools. With the citizenship curriculum introduced this term, that arrangement raises the possibility of contradictory lessons. A pupil could be instructed in the beliefs of the Catholic Church in one schoolroom, then hear opposite arguments in another.

Education Ministry officials say that teaching about citizenship and laws, and all that goes with it, including tolerance for minorities, is essential in a Spain that is no longer homogenous. The number of children of immigrant parents in Spain's pre-university school population, officials point out, has grown nearly tenfold in the last decade.

"The reality of Spain today is that students are coming from different kinds of families," Alejandro Tiana, secretary-general of the ministry, said in an interview.

"The education system should teach the importance of fighting discrimination and avoiding homophobia. The new curriculum does not impose a code of personal morality but one of civic principles, Tiana said. In other words, it aims not to govern personal convictions but behavior within society.

But opponents contend that the government is using the courses to impose its own beliefs. By refusing to establish marriage between man and woman as the only acceptable form, for example, the instruction creates a kind of "relativism" in which there are no rules or absolute truths, the critics maintain.

"If you can't tell good from bad, then you can't be a good citizen," said Benigno Blanco, head of the Spanish Family Forum, a coalition of conservative organizations.

The new curriculum, he said, "makes a moral code of what the government of the moment wants."

Tiana, the ministry official, said the citizenship courses would not force pupils to change their core beliefs but would help them understand what it means to be a responsible citizen in a diverse world.