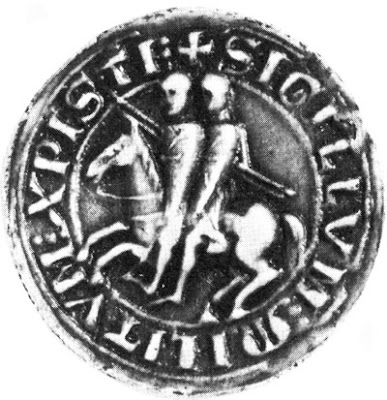 Sheiks, libraries and collectors around the world have ordered the Vatican's new US$8,400 limited-edition documentation of the heresy trial of the Knights Templar, officials said Thursday.

The leather-bound volume, which includes high-quality reprints of the original documents as well as clerical seals, is noteworthy because it contains a long ignored parchment showing that Pope Clement V initially absolved the medieval order of heresy.

Scrinium publishing house, which prints documents from the Vatican's Secret Archives, is issuing 799 editions of the volume - and plans in the coming days to present one to Pope Benedict, officials said at a presentation inside Vatican City.

The order of knights, which ultimately disappeared because of the heresy scandal, recently captivated the imagination of readers of the best-seller "The Da Vinci Code," which linked the Templars to the story of the Holy Grail.

The Vatican work reproduces the entire documentation of the papal hearings convened after King Philip IV of France arrested and tortured Templar leaders in 1307 on charges of heresy and immorality.

In addition to sheiks and libraries, individual collectors, Templar associations and cultural organizations around the world have reserved copies, though about 300 are still available, said Scrinium president Ferdinando Santor.

He declined to identify any buyers by name, citing Italian privacy laws, but said they included "internationally famous" people.

The military order of the Poor Knights of Christ and of the Temple of Solomon was founded in 1118 in Jerusalem to protect pilgrims in the Holy Land after the First Crusade.

As their military might increased, the Templars also grew in wealth, acquiring property throughout Europe and running a primitive banking system.

After they left the Middle East with the collapse of the Crusader kingdoms, their power and secretive ways aroused the fear of European rulers and sparked accusations of corruption and blasphemy.

Historians believe Philip owed debts to the order due to his wars with England and used the accusations to arrest its leaders and extract, under torture, confessions of heresy as a way to seize the order's riches.

The new volume includes the "Parchment of Chinon," a 1308 decision by Clement to save the Templars and their order that was long ignored due to a vague catalogue entry made in 1628.

Vatican archives researcher Barbara Frale determined the significance of the parchment in 2001, realizing that it was not of secondary importance as had previously been thought but actually concerned a trip by three top cardinals, including Clement's right-hand man, to interrogate the Templars' Grand Master and other top officials.

The parchment shows that Clement initially absolved the Templar leaders of heresy, though he did find them guilty of immorality, and that he planned to reform the order.

However, under pressure from Philip, Clement later reversed his decision and suppressed the order in 1312.

The Templars' grand master, Jacques de Molay, was burned at the stake in 1314 along with his aides.

Surviving monks fled. Some were absorbed by other orders; over the centuries, various groups have claimed to have descended from the Templars.

The prefect of the Vatican Secret Archives, Msgr. Sergio Pagano, said the value of the new edition lies in its artistry as well as in the historical commentary that accompanies it, written by Frale and two other Vatican historians.

He sharply criticized the attention the new edition had elicited in the media, saying such furor was "not in the style of the archive."

"The archive follows a humble style," he said at the book presentation. "We are convinced - perhaps we are among the few - who believe that books are published to be read and studied, not to be presented."